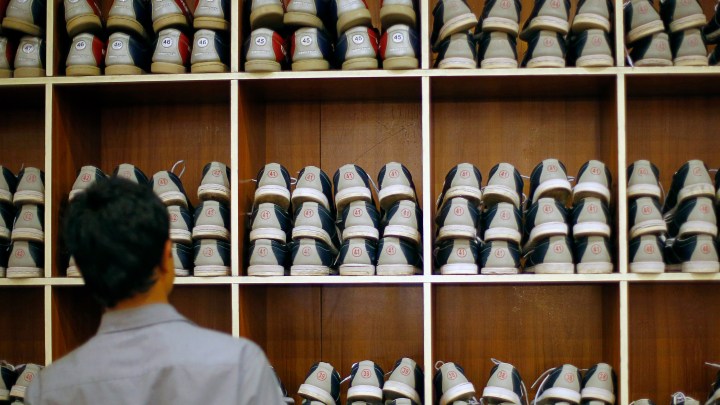 COPY
If you want to understand the repo market, think about renting shoes at a bowling alley. Alexander Klein/AFP/GettyImages
Kai Explains

If you want to understand the repo market, think about renting shoes at a bowling alley. Alexander Klein/AFP/GettyImages
Listen Now

Look, the economy is complicated and it moves fast. News breaks and headlines don’t always tell the whole story. That’s why we’re launching a new series where we take it back to the basics. It’s called “Kai Explains.” This time, we’re talking about something you may have seen in the headlines lately — the repo market.

Over the past few weeks, the Federal Reserve Bank of New York has injected money into something called the repo market. The repo market is a wonky but important part of our financial system that’s crucial for keeping money moving in this economy. This is the Fed’s first major intervention in the repo market since the financial crisis, but the issues facing it today are fundamentally different than they were a decade ago.

Repurchase agreements, or “repos,” are a type of short-term collateralized loan. They’re a normal part of doing business for investment banks and other financial institutions. In a repo trade, one institution in need of quick cash essentially sells assets (often Treasury securities) to another, with the promise that the first party will repurchase them the next day to return the cash.

If you want to understand the repo market, think about going to a bowling alley

“If you were going bowling, you’d walk up to the counter wearing your fancy shoes, deposit your shoes at that counter, and they’ll give you bowling shoes that you can borrow,” said Beth Hammack, global treasurer at Goldman Sachs and former head of its repo trading desk. “You pay a small fee to do that. But they have your shoes as collateral against the bowling shoes they’ve given you.”

“The fee I pay to borrow those shoes? That’s the repo rate,” Hammack said.

Or you could think of an arcade

We ran Hammack’s bowling alley analogy past Andrew Metrick, a professor of finance and management at the Yale School of Management and director of the Yale program on financial stability. He said the bowling alley analogy is pretty good, but he thinks the nature of the assets being traded in the repo market is more analogous to a quarter machine at an arcade.

“You go into an arcade and you have dollar bills and you need quarters,” he said. “Four quarters is worth one dollar bill. There is no difference between them. It’s just that you actually need to have quarters in order to work the arcades.”

Treasury securities, which are often used as collateral in repo trades, are very similar to cash. They are extremely safe and can be easily converted to cash. But just like quarters in an arcade can be used for different purposes than a $1 bill, cash can be used for different purposes in the financial market. For example, if a bank needs to make payroll, they can’t do that with treasury securities. They need to do that with cash.

The repo rate on some loans, which in this analogy is the amount over $1 that you pay to get four quarters, jumped from around 2% at the beginning of September to a peak of around 10% by the middle of the month.

In the context of the arcade analogy, “there’s fewer places to exchange your dollars for quarters, and so there’s a really, really long line,” Metrick said. “And so people are willing to pay more than $1 in order to get four quarters.”

To understand why the repo rate spiked in September (i.e. why there was such a rush on bowling shoes or quarters all at once), Metrick said it’s also helpful to think of the cash that banks need as power for the economy.

On a power grid, there are certain peak usage times, like during the summer when everybody is running air conditioning. Those spikes can cause problems for the whole grid.

On this power grid that we call the financial system, usage spiked last month. It was getting close to the end of the quarter, corporate tax payments were due, and too many banks needed cash at the same time. That’s when the New York Fed stepped in.

Let’s go back to that bowling alley

“The Fed is essentially lending bowling shoes in the marketplace,” Hammack of Goldman Sachs said. By bringing more bowling shoes to the bowling alley (in other words, injecting capital into the repo market), the New York Fed was able to bring the repo rate back down to a more normal level. “That’s their job” Metrick said.

So should we be worried?

Before the financial crisis, a common asset used in repo trades was mortgage-backed securities. In 2008, the falling value of those securities, combined with a lack of faith in the creditworthiness of some institutions involved in repo trades, like Lehman Brothers and Bear Stearns, triggered a credit crisis in the repo market.

As for what’s happening in the repo market today, Metrick said unlike 2008, “there’s no concern about credit risk going on here. It’s really more about the plumbing of the system.”

“What you have here is a leak in the pipes of the plumbing of the financial system,” Hammack said. “The Fed came in very quickly and they patched that leak. It’s going to hold for some period of time, and they’re looking at ways that they can fix it on a more permanent basis”