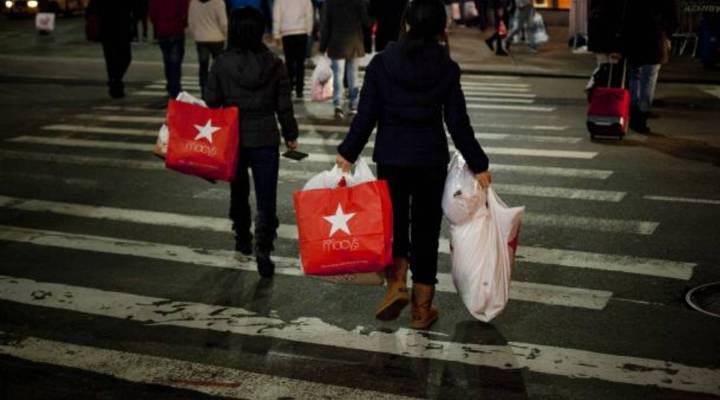 What makes us open our wallets

Consumer spending is up, but we can't just shop our way to a recovery. Michael Nagle/Getty Images

What makes us open our wallets

Consumer spending is up, but we can't just shop our way to a recovery. Michael Nagle/Getty Images

Tess Vigeland: A very merry holiday weekend to you all. Hope you’re enjoying a day or two of well-deserved time off. At the very least, hope we’re all taking a few days away from the spending binge that tends to characterize this time of year. Because you know what comes next: The financial hangover that is the month of January.

But here’s a question for you to ponder as you recycle all that wrapping paper this week: What is it about us as consumers that drives us to want all those things? Sure, you could blame Madison Avenue, but marketers alone can’t make us open up our wallets to spend.

James Roberts tries to answer that question in a new book called “Shiny Objects: Our Obsession with Possessions and the Truth About Why We Buy.” Welcome to the program.

James Roberts: Thank you. Thanks for having me.

Vigeland: So why are we spending the money we don’t have to find the happiness we cannot buy?

Roberts: There’s a number of reasons. One is that we’ve got a lot of people encouraging us that happiness can be bought online, at the mall or in a catalog. And then there’s a lot of other reasons — security, we feel better when we have things around us and purchasing can make us feel a little bit safer.

Vigeland: But it’s interesting that your book comes out at this point in time, three years after a massive financial collapse. You know, we’ve heard all about the “new frugality” in this country and that perhaps people aren’t focusing as much on material goods. So why did you feel like now is a good time to spread this message?

Roberts: You know, every decade has its recessions — and 2008 was a bad recession. I mean, I think Warren Buffett was the one who said that was the closest the U.S. had come to a total financial collapse since the Depression. But every decade had its recessions. But here’s the interesting part: When you look at each one of them very simply, what you find is not only after we get out of the recession or perceive that we’re coming out of the recession, do we spend more money. But we actually spend more money than we did prior to the recession.

Roberts: I refer to this as “short-term consumer amnesia.” And 2008 was no exception. We kinda tightened our belts, and we did. We rallied around the cause and we were worried. People were out of work, and if we weren’t out of work, we were worried about being out of work. Things were more expensive. And so we tightened our belts and savings even went from an anemic, pre-recession, maybe as low as 1 or 2 percent — even actually into the negative numbers, pre-recession.

Vigeland: Yeah, I remember that.

Roberts: Well, we tightened our belts and we were up to about 7 percent. But when we saw that glimmer of hope on the horizon, that possibly the economy was goign to start to run, what happened? We stopped saving.

Vigeland: Let’s talk brass tacks here then with money and happiness and where the two actually perhaps do meet. And you talk in the book about how there is an actual cut-off after which money adds very little to our happiness. What is that number and how do we arrive at that?

Roberts: That particular study that I used says that the figure is about $60,000. There is a relationship between money and happiness up to a point. But after that point where we’ve kind of covered the basics — we’ve got a roof over our head, we have enough food on the table — and then after that, it just doesn’t deliver the goods. Pardon the pun.

Vigeland: Well I think perhaps we see that. I know that there are studies out there that show that almost the more money you make, the more you want to make because then it feels like it’s never enough.

Roberts: We call that the “treadmill of consumption.” And we buy our first house. It’s bigger than our apartment and it’s got 1,200 sq. feet and it’s enough. But all of a sudden that becomes our new norm because we adapt. So all of a sudden now that new norm of 1,200 sq. feet is what we look at as our frame of reference to the rest of the world. So that ability to adapt both serves us and can undermine our well-being.

Vigeland: Can we frame the discussion slightly differently and ask what the relationship is between our happiness and the amount of debt we have. So we talk about happiness versus how many things we have and what we’ve bought, but what about debt? Where does that play in here?

Roberts: These materialistic longings that we have don’t just have a negative impact on our pocketbook, but they impact how we feel about ourselves and they impact our willingness to get involved in the community. Really, research tell us those are the real keys to happiness, and materialism is antithetical to all three of ’em.

Vigeland: Well, so Christmas is upon us and in a couple of days, the sales season is gonna be full swing. So that temptation to shop is gonna be pretty big for a lot of folks. Do you have any advice on how to prepare ourselves?

Roberts: What I would suggest is set a budget and stick to that budget. When you go out shopping, use layaway. The great thing about layaway is that it forces you to pay off your items before you get ’em. Come January, you avoid that financial hangover.

Vigeland: James Roberts is author of the book “Shiny Objects.” Thanks so much for coming in.