Earlier this week, we talked about hand-held electronics on airplanes. Why can’t people keep them on? What gives? Yesterday the Federal Aviation Administration gave the OK for American Airlines pilots to use iPads in the cockpit starting Friday. So, what gives?

The New York Times reports that the F.A.A. “limited the number of approved devices in the cockpit to two, one for each pilot. ‘This involves a significantly different scenario for potential interference than unlimited passenger use, which could involve dozens or even hundreds of devices at the same time,’ the F.A.A. said in the statement.”

American will be the first carrier to be fully approved for iPads. United, Delta, Alaska, and British Airways are among the other carriers expected to make the switch from bulky, paper flight plans to the device. 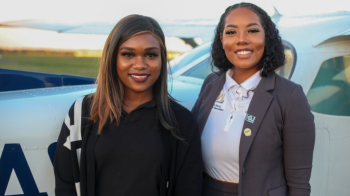