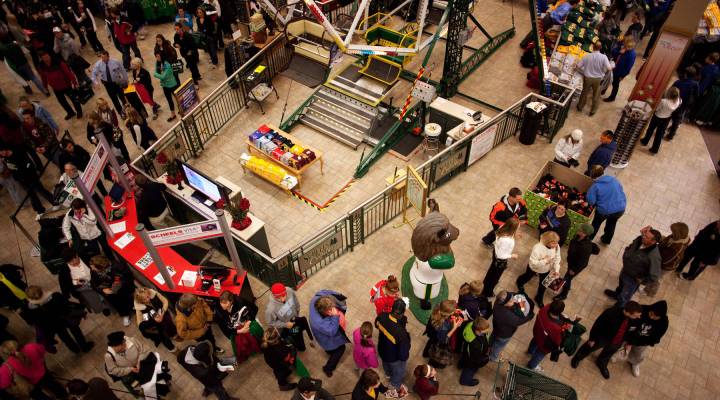 Black Friday sales helped bolster the retail numbers, which went up for the sixth month in a row. Chris Franz/Getty Images
Listen Now

The government said this morning that retail sales jumped last month for the sixth straight month. Americans spent more on cars, clothing and furniture – and spent less on building materials gas and groceries.

U.S. businesses increased their stockpiles in October after slowing inventory growth in the previous month. The buildup in inventories should help the economy grow modestly in the final months of the year.

In Washington, the nation’s central bankers are getting ready for a meeting at the Fed. And at the end of it, they’ll release a short statement as they always do. But this time could be a little different. Some economists who watch the Fed think the central bank is about to signal an earlier end to its free money policy.

Gold has fallen to a seven week low, as cautious investors opt for the safety of the U.S. dollar instead.

The people who make champagne are popping the top these days. Sales of bubbly is up 15 percent over the same time last year. But the European debt crisis could eventually flatten the fizz.

Business groups in Illinois are pushing lawmakers today to pass a $330 million package to keep two companies in the Land of Lincoln: Sears, and the Chicago Mercantile Exchange — which, you’d think would have to change its name if it left.

A 26-year old man at an Austrian casino pulled the lever on a slot machine, and up came a bunch of matching fruit on the screen. Then lights all around him started flashing! And bells went off! And the machine exclaimed he won $60 million — wow! Turns out though, only four of five fruit had lined up. And because of a software glitch, the machine thought that was the jackpot. The man is suing the casino because they won’t honor the big cash prize. Instead, the casino offered him about $100 and a free meal.

With less than 2 weeks to go before Christmas, you might be interested in this new scientific research. Gift recipients, it turns out,  are not interested in expensive gifts. And they might not even care if a gift took a lot of thought. Those two factors apparently bring more joy to the giver than the recipient. In today’s Mid-day Extra, we ask one of the researchers to explain what we should actually be worrying about when it comes to picking out presents.