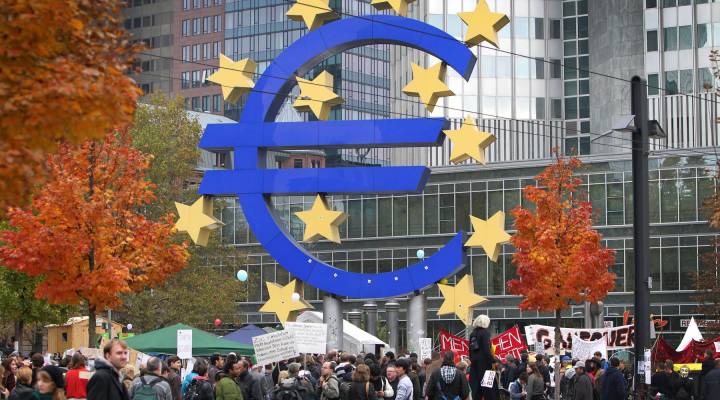 The European Central Bank is joining with other central banks to stop a credit crunch, but it could be a sign that there is more danger on the horizon. DANIEL ROLAND/AFP/Getty Images
European Debt Crisis

The European Central Bank is joining with other central banks to stop a credit crunch, but it could be a sign that there is more danger on the horizon. DANIEL ROLAND/AFP/Getty Images

Stacey Vanek Smith: The situation in Europe that’s been rattling the markets all week has sparked speculation that Europe is headed toward an economic crisis like the one we had in 2008.

David Blanchflower is an economist at Dartmouth. He was with the Bank of England when the financial crisis hit. And in a recent Op-Ed in the Guardian, he said the eurozone remains divided at its peril. He joins us now. Good morning, David.

Smith: David, when the last economic crisis hit in 2008, you were part of the decision-making team at the Bank of England. Did that crisis and the actions that you took then — could that potentially provide a script for how the European Central Bank should act in this current crisis?

Blanchflower: I certainly think there is a great feeling of similarity right now to what happened, especially in October 2008 with central banks acting together as they did last week. And my worry is, just as happened in 2008, it was because they’d seen things that everybody else haven’t seen, and things were much worse than actually most people knew.

And it pressured something really terrible happening, which was a big drop in output and huge increase in unemployment. It was particularly driven by a global banking crisis, and here we go again.

Smith: You mentioned this in your op-ed as well, but it sounds like you think this situation is also maybe worse than we know?

Blanchflower: Well, I certainly think what it tends to say to you is: Central banks acting together is a really difficult thing to do. You have to get 50 or 60 people to agree together to all of the wording and to act together. And that takes some time, and it probably means that they’ve seen something pretty awful that they have to respond to.

So I take it to mean that actually, they’ve probably seen something — perhaps a European bank that’s come and not been able to make a payment and that’s had to be rescued secretly, as happened in October 2008.

Smith: David Blanchflower is a professor of economics at Dartmouth and an ex-member of the Bank of England. David, thank you so much.