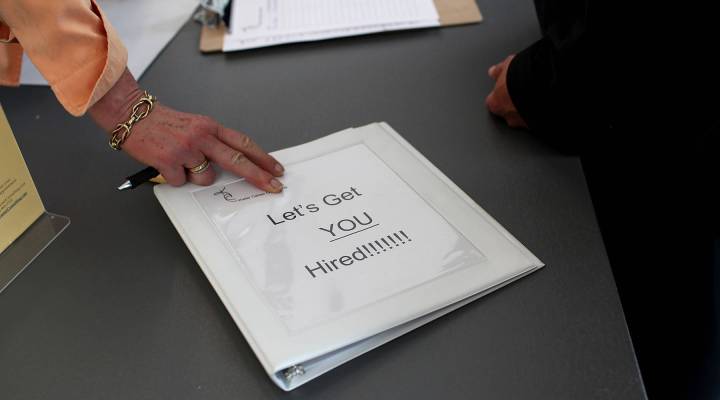 COPY
A representative with an employment agency points to a folder with job seeking resources during the Job Hunter's Boot Camp at College of San Mateo on June 7, 2011 in San Mateo, Calif. Justin Sullivan/Getty Images
Mid-day Update

A representative with an employment agency points to a folder with job seeking resources during the Job Hunter's Boot Camp at College of San Mateo on June 7, 2011 in San Mateo, Calif. Justin Sullivan/Getty Images
Listen Now

Employers were hiring in November. They added 120,000 workers, according to the Labor Department. And the unemployment rate unexpectedly fell — a lot — 0.4 percent, to 8.6 percent. The U.S. economy has been adding about 130,000 jobs a month this year, when you average it out.

German chancellor Angela Merkel has put forth a new strategy for enforcing budget discipline on member countries and boosting the euro. That’s reassured investors and driven down the cost of borrowing for Italy and Spain.

The Senate yesterday failed to agree on a deal that would extend payroll tax cuts, a key part of President Obama’s stimulus. Right now, those tax cuts are boosting the average American’s take-home pay by more than $1,000.

Massachusetts is suing five big banks over so-called ‘robo-signing’ of foreclosure notices to homeowners. That could derail negotiations toward a nationwide settlement.

Toyota said today it’ll continue reduced operations at its Thailand facility because of the impact from flooding there.

Oil’s trading a little higher today, at just over $100 a barrel.

St. Petersburg, Fla. Detroit, Michigan. Memphis, Tenn. If you live there, you might just be sad. These cities top a list of America’s saddest places in Men’s Health Magazine. It crunched a bunch of numbers, including unemployment and use of anti-depressants. At the other end of the list, the happiest people are in Honolulu. No surprise, maybe… but it’s not just the balmy weather. Manchester, N.H., and Fargo, N.D., are close behind.

Here’s an idea for government officials who have to deal with unhappy business owners. Remember who you’re dealing with. In India, local officials allegedly threw up so many government roadblocks and charged so much in bribes that a local property owner decided to fight back in his own way. See, the man was a snake charmer, who applied to raise his snakes on government land. And the bureaucracy got him so angry that he marched right down to the government office. And released his snakes — including some Cobras in the middle of the work day. Workers jumped on desks, ran into closets. But no one was bitten.