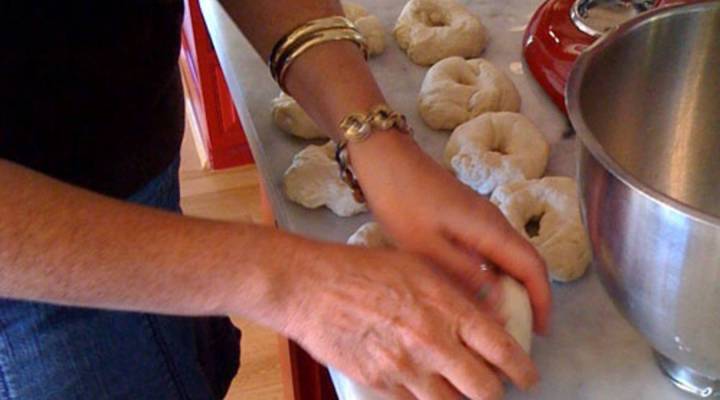 COPY
Homemade bagels are cheaper than store-bought ones. Jam and butter, just buy at the store. Tess Vigeland/Marketplace
Shelf Life

Homemade bagels are cheaper than store-bought ones. Jam and butter, just buy at the store. Tess Vigeland/Marketplace
Listen Now

Tess Vigeland: While we’re on the subject of lessons, frugality is one of the big ones we’ve all learned over the last two to three years. Shortly after the economy imploded, Jennifer Reese decided to cook everything she and her family ate from scratch and compare the cost to what she could buy at a supermarket. I visited her home near San Francisco in 2009 to get a first-hand look and taste.

And now the result of that experiment is a new cookbook called “Make The Bread, Buy the Butter: What You Should and Shouldn’t Cook From Scratch. Jennifer, nice to have you back with us.

Vigeland: Well, of course, the title of the book is “Make the Bread, Buy the Butter,” and we talked at that time why that was that the cost-benefit analysis was in favor of going in and buying that pat of butter. Was there anything as you went through this experiment that surprised you? Where something homemade was not cheaper or something in the store was?

Reese: Yeah. There were a lot of weird foods that you wouldn’t expect to be cheaper to buy that were. Like I thought, “If I had the energy, I would always make my own lemonade and that would be really frugal.” But in fact, it costs about twice as much to make lemonade from real lemons, as it does to go to the store.

Reese: Yeah, Newman’s Own is a good deal.

Vigeland: Even here in California where citrus is a bargain.

Vigeland: There were a few surprises in the cookbook, where you even went so far as to price out making your own prosciutto. Now, I don’t know if I would go that far as to go find some raw pork and season it for myself. But you went far beyond butter here.

Reese: I did, I did. And the prosciutto is a funny example, because I did do it and it did work and it was the horrifying thing when it came out of its curing… It was like covered with mold. And I don’t have room in my refrigerator for this enormous prosciutto. And in the end, I threw most of it away.

Vigeland: So you’ll be buying that from now on.

Vigeland: Well then, part of the reason I came up to visit you a couple of years ago was because there had been a spate of new stories about people raising chickens in their own backyards. It became this kind of meme in the media. And I had real questions about the financial wisdom of making those kinds of moves. What is your conclusion at this point?

Reese: I think that if you have the infrastructure, if you have a coop and you have a proper fence that no dogs can see through, it’s not that expensive to keep chickens day-to-day. If you have to put in the infrastructure — which most of do — it can be outrageously expensive in the end. I had to build a fence for my chickens — and I count that against the cost of getting eggs. So that was a $3,000 fence and so I don’t think you will necessarily save money if you get chickens.

Reese: I have three goats

Reese: That was another thing that I probably gotten $25 worth of milk out of them and each goat cost $100.

Reese: I don’t regret it. But the truth is is the ways that you can save money are buying your spices in bulk and grinding them at home. You know, making your muffins, instead of going to Starbucks. It’s simple things, not the more glamorous things, like getting chickens — if you think getting chickens is glamorous.

Vigeland: So this book is really about making it so people don’t have to make this dollar calculation. But at a certain point I suppose you’ve probably found that it’s not all about dollars anyway.

Reese: No, no. YOu learn how to make something and you realize how much better it is than what you buy. And so even if it costs a little more — which it usually doesn’t — you’ll end up making it, because the quality of what you eat, and therefore the quality of your life is enhanced by doing it.

Reese: In terms of the morality, one of the reasons we do have chickens now is that it makes my skin crawl to buy supermarket eggs, and even though eggs that we have in our backyard have been more expensive than the supermarket eggs.

Vigeland: Well, we have a very big national cooking holiday coming up. And I wonder if you have any advice for people who are getting ready to make the biggest of all meals and are trying to decide what to make and what to buy?

Reese: It actually tasted better, and it was so much easier and tasted better. I’m pro-can. Stuffing, you know, homemade stuffing is better. But I do have a sentimental attachment to Pepperidge Farm’s because that’s what I grew up with.

Vigeland: Jennifer Reese is the author of “Make the Bread, Buy the Butter.” She is also known as the Tipsy Baker. Good friend of the show. Thanks so much and good luck with the book.

Vigeland: And we have a link to our original visit with Jennifer  and you can read an excerpt of Jennifer’s book (PDF).