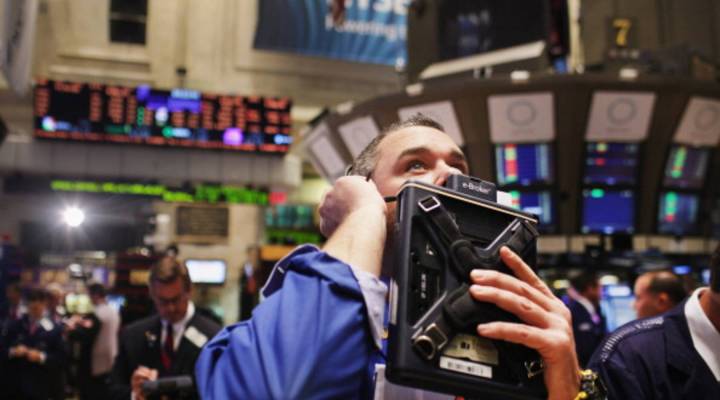 COPY
A trader works on the floor of the New York Stock Exchange during morning trading on Sept. 22, 2011 in New York City. Spencer Platt/Getty Images

A trader works on the floor of the New York Stock Exchange during morning trading on Sept. 22, 2011 in New York City. Spencer Platt/Getty Images
Listen Now

Bob Moon: A day I can sum up in one word: Ugh. Investors were grunting today over plunging stocks, oil, even gold. Prices of seemingly everything except U.S. Treasury bonds tumbled around the world. There was worrying economic data out of China. And a French official was quoted as saying 16 European banks will be ordered to shore up their cash reserves at once.

Mostly, though, yesterday’s move by the Fed to prime the U.S. economic pump seems to have done more immediate harm than good. As Stacey Vanek Smith reports, the Fed’s words spoke louder than its actions.

Stacey Vanek Smith: The Federal Reserve unveiled Operation Twist yesterday, but today it was the “why” that had investors worried.

Jack Albin: When you have the nation’s largest economic cheerleader say there are significant downsides to their forecasts, that sends shivers out there.

The Fed’s exact words were: “There are significant downside risks to the economic outlook, including strains in global financial markets.” That’s Fed-speak for: The economy is looking worse. And the plan itself — buying $400 billion worth of long-term bonds — may not do much to change that.

Gary Shilling: A clear revelation that the Fed has run out of ammunition.

At a time when there is no shortage of economic threats — unemployment, a depressed housing market, political gridlock, not to mention the situation in Europe. Fear that all of those things will lead to another recession is what’s really plaguing the markets, says Georgetown finance professor James Angel.

James Angel: When the Fed came out and said, ‘yeah it’s bad out there.’ Everybody said, ‘Oh no.’

Angel says investors were looking for reassurance from the Fed yesterday.

Angel: When the Fed says there’s going to be continued weakness in the economy and it’s so weak that we’re going into another major Fed operation here, that in itself is a signal.

A signal confirming investor’s fears. A little bit like the Fed saying, ‘Actually America, that dress does make you look fat.’