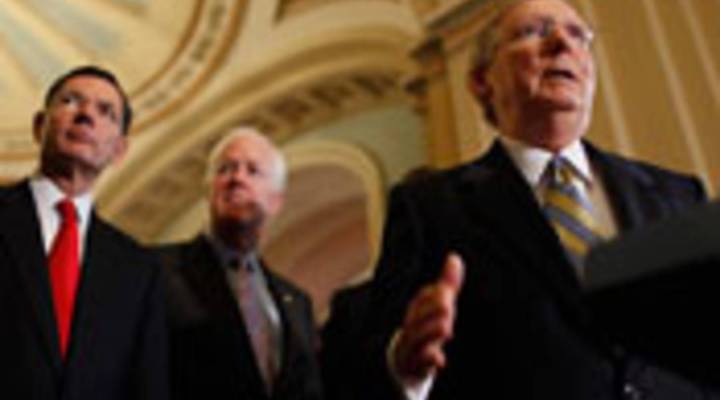 We’ll hear from the Federal Reserve this afternoon and find out if the expectations are correct that the Fed will shift some of its investments in an attempt to bring interest rates down even further.

Top GOP leaders, by the way, sent a letter to the Fed yesterday, urging no new monetary action.

More people in the U.S. bought pre-owned homes in August. But the National Association of Realtors says the numbers were driven mostly by an increase in
foreclosures sales, and the housing market is still in the tank.

Lloyds of London, is reporting a loss of more than $1 billion for the first six months of the year. And all due to a record number of claims from natural disasters.

Fosters may no longer be Australian for Beer. The company is being bought for $10 billion by the British brewing and bottling company SAB Miller.

Engineers say tar balls turning up on Alabama beaches after Tropical Storm Lee have the same chemical composition as samples taken shortly after the BP oil spill. That’s from an Auburn University study out this week.

And word this morning from All Things D that Apple is going to unveil the iPhone 5 on October 4th. Apple has not confirmed the report and, given the company’s love of surprises, it probably won’t.

We’re looking for ideas — MMR host Steve Chiotakis is thinking of dressing up as “the economy” for Halloween, so what does he wear? He tweeted that question on his Twitter account. Here are some of the responses: A wooden barrel. A half of a suit on top and a potato sack on bottom to show the dichotomy between Wall Street and Main Street. And the favorite so far: an unemployed hobo doing the Twist. Keep those Tweets coming — the address is @RadioChio.

A new museum opened up over the weekend in Japan. It’s celebrating the history of instant noodles. The museum was opened by the company that makes Cup Noodles, which is still run by the family of the inventor of instant noodles. A guy by the name of Momofuku Ando who came up with the idea to solve hunger problems in Japan after world war two. He used to say: Peace prevails when food suffices. And instant noodles definitely suffice with 95 billion servings being consumed around the world last year.

The last round of a college golf tournament in Fort Worth, Tex., had to be called off yesterday after a tree limb fell near the 18th hole. Talk about a hazard — that limb held a huge beehive, and several people nearby were stung by the reported 70,000 bees. There were no serious injuries thank goodness. But it did leave me wondering, wo stuck around to count all the bees?