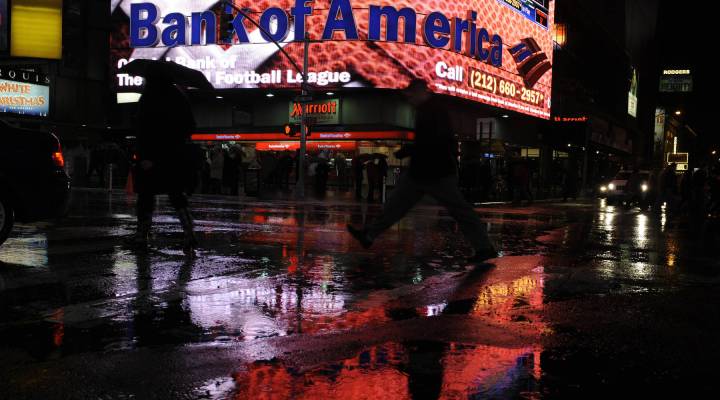 The markets buzzed today with reports that Bank of America may have to cut 40,000 jobs. This bad news comes less than 24 hours after President Obama launched a job creation proposal that looks both lackluster and doomed to failure in Congress. The combination of these disappointments is giving the US economy a bad case of bradycardia, pushing Marketplace’s Daily Pulse down to dangerously low levels.

There was some disagreement about how deep these cuts could actually be. The AP said B of A will cut at least 10 percent of its work force. The Wall Street Journal reported the 40,000 number, and said it would be about 14 percent of the bank’s 288,000 staff. Bloomberg said about 10 percent of staff will be cut. No-one named sources, and the bank didn’t comment. The reports said they expect an announcement Monday. The markets were jolted by the news, and the bank’s stock fell nearly three percent.

B of A has already cut at least 6,000 jobs this year. Marketplace’s Heidi Moore reported that the bank laid off 3500 people just yesterday. CEO Brian Moynihan announced a restructuring called Project New BAC several months ago. It’s supposed to streamline the bank’s operations and focus on institutional, corporate and individual customers. Most of these cuts are expected to happen on the consumer side, but investors and consumers, regardless of which division they’re involved with, are wondering if the bank will be able to operate effectively going forward.

The bank’s biggest issue is the ongoing fallout from the $4.1 billion purchase of Countrywide in January 2008. B of A thought is was getting a bargain in the deal, but Countrywide was stuffed with toxic mortgages that have poisoned Bank of America, and driven it to the brink of failure. Josh Brown, a financial planner at Fusion Analytics told Heidi Moore that that B of A’s executives got greedy, and now the banks employees are paying for it. “They got big eyes, bigger than what their stomachs could handle. That’s how a great consumer bank ends up becoming basically a trash pile of financial assets,” he said.

Observers say much of the Countrywide asset pool may have to be valued significantly lower than it is right now, and B of A will have to pay billions of dollars in legal costs related to those mortgages. The bank also has exposure to troubled European institutions, which could also prove troublesome and expensive for B of A if things go bad across the pond. All of this adds up to a risky bet, in the eyes of investors.

In her story today, Heidi Moore spoke with Michael Yoshikami, founder of YCMNet Advisors, who voiced his concern about the bank’s prospects. “We don’t own Bank of America shares because we’re just not clear about what the bottom looks like in terms of their financial issues,” he said.