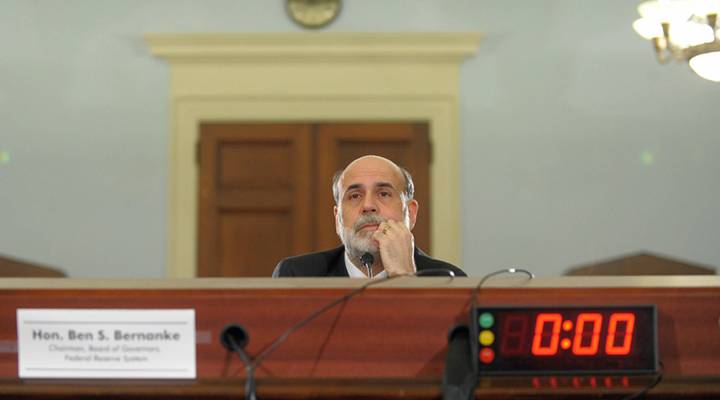 COPY
Federal Reserve Board Chairman Ben Bernanke testifies during a hearing before the House Budget Committee Jan. 17, 2008 on Capitol Hill in Washington, D.C. Bernanke was on the Hill to give his views on the outlook of U.S. economy and he said the economy has been growing slow. TIM SLOAN/AFP/Getty Images
Divided Decade

Federal Reserve Board Chairman Ben Bernanke testifies during a hearing before the House Budget Committee Jan. 17, 2008 on Capitol Hill in Washington, D.C. Bernanke was on the Hill to give his views on the outlook of U.S. economy and he said the economy has been growing slow. TIM SLOAN/AFP/Getty Images
Listen Now

Federal Reserve Chairman Ben Bernanke stared at the screen of his Bloomberg terminal on Martin Luther King Jr. Day, 2008 – a holiday, but not for him. He saw steep declines in Asia and Europe. It looked like fears of recession in the U.S. could be taking hold in markets globally.

That was 10 years ago this week. With hindsight, we know now things would get even worse in the coming months. But at the time, “we were struggling,” said Thomas Hoenig, who was then president of the Federal Reserve Bank of Kansas City. “Was this going to be a downturn that like other downturns and you managed through it or was it going to be more serious?”

Because Hoenig was also a voting member of the Federal Open Market Committee, which sets interest rate policy for the Fed, he received a call that MLK Day, requesting he dial into an emergency video conference that evening. He listened as Bernanke pitched a significant cut in interest rates – three quarters of a percent, triple the adjustment the Fed might make in calmer times.

It was rare for the Fed to change interest rates outside of a regularly scheduled meeting – and by such a relatively large increment. The last rate cut that big was back in 1982. The last rate cut between meetings was in 2001, after 9/11.

“I did not know how I would vote,” said Hoenig, who is now vice chairman of the Federal Deposit Insurance Corporation. “I had anticipated that we would have a meeting in a few days, but I did notice the data coming in and I did notice that there was evidence of weakness.”

It wasn’t just the stock market, which had lost 10 percent of its value in the first three weeks of the new year and was expected to lose another 5 percent the following day. Throughout the fall of 2007, there had been obvious signs of distress in the housing market and a credit crunch among financial institutions. Earlier that January, Bank of America announced it was buying the failing subprime mortgage lender Countrywide Financial. Just the week before, Merrill Lynch and Citigroup had taken a combined $35 billion in write-downs. The Fed staff had cuts its growth forecast for 2008 to a feeble 1 percent, though it wasn’t yet predicting a recession.

Some committee members immediately supported Bernanke’s rate cut. Others, including Hoenig weren’t sure.

“Were things are deteriorating as badly as that data was perhaps previewing, when you didn’t actually have a long trend of that?” Hoenig questioned. “Do you want to act too soon, which may actually encourage fear?”

Cutting rates that much and doing so outside of a regularly scheduled meeting might further spook markets. On the other hand, acting now might reassure people, show the Fed was willing to do whatever it took to steady the economy.

Bernanke favored action, even titling his memoir of the crisis “The Courage to Act.” The FOMC voted to approve the rate cut, which was announced the following day.

“It’s not like, ‘Where were you when Kennedy was shot’ kind of thing, but as a historian I can tell you that it was an extraordinary day,” said Peter Conti-Brown, an assistant professor at the University of Pennsylvania’s Wharton School of Business and a Fed historian.

“I think this is an important canary in the coal mine to show exactly how the Fed is going to approach its own conception of its emergency authority,” he added. “We see that the Bernanke Fed is truly going to do whatever it takes in order to sustain its economic mission.”

In addition to its unscheduled rate cut, the FOMC cut rates an additional 0.5 percent, to 3 percent on Jan. 30, 2008, its next regularly scheduled meeting.

In the coming months, it would finance JPMorgan Chase’s purchase of Bear Sterns and lend billions of dollars to insurance giant AIG. It would cut the federal funds rate to near zero and start multiple rounds of quantitative easing, buying trillions of dollars of mortgage-backed securities and Treasurys.

All those actions had lasting consequences – for the economy, but also for the Fed.

“The external image of the Fed changed enormously,” said Alan Blinder, an economist at Princeton University and former vice chairman of the Fed’s Board of Governors. “Both the parts of the public that pay any attention to this and, importantly, the Congress were basically wowed by the Fed’s power. Most of them had no idea that the Fed could do all the things it did.”

Blinder believes the Fed’s response made the financial crisis significantly less severe than it otherwise would have been, but the timing of Fed actions, whether it should have done more or less is still debated.

By 2009, the Fed had the lowest public approval rating of federal agencies in a Gallup survey. Back in 2003, it had the third highest.

“I think one of the lessons, for better or worse, of the 2008 crisis and the Fed’s decisions after the fact are that the Fed should tread lightly and should be extraordinarily deliberate when it deploys its extraordinary powers because the political consequences are immediate,” said Wharton’s Peter Conti-Brown.

He added that the political backlash might make the Fed less willing to flex its muscles in future crises the way it did 10 years ago.

Bernanke wrote in his memoir that by the end of January 2008, he thought the Fed had “correctly calibrated” its response.