August Chicago PMI came in at 56.5 beating estimates but below the July figure. The number was the lowest since November 2009. (via Clusterstock)

Companies added 91,000 jobs in August, missing expectations of 100,000 new jobs and coming in below the downwardly revised 109,000 positions created in July, according to ADP, the payroll processor. (Via FT)

Groupon’s unique visits fell 8.9% to 30.6 million in July, says Compete. LivingSocial saw an even faster decrease of 28% to 10.6 million. (via Felix Salmon)

Fifteen IPOs registered with the SEC were withdrawn this month, according to fresh U.S. figures from data provider Dealogic. That is the most spiked IPOs in any month since April 2001, when there were 20 withdrawn IPOs.

The OECD reports global trade is slowing: exports for G7 countries and BRIC nations (which now includes South Africa) rose 1.9% in the second quarter from 7.7% in the first quarter. Imports were up a mere 1.1% compared to 10% the previous quarter. 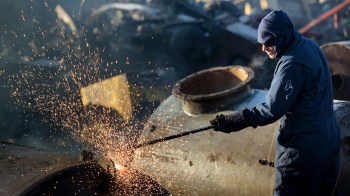