Economic growth stalled in the spring. The Commerce Department reported today GDP inched up 1.3 percent in the second quarter. Gross Domestic Product measures all the goods and services our country produces. It’s one of the most watched economic indicators.

U.S. consumer sentiment fell in July to its lowest point in more than two years, as anxieties over stagnant wages and rising unemployment deepened, a survey released Friday showed.

Employment costs surged a steeper-than-expected 0.7 percent in the second quarter, the biggest gain since September 2008, on a jump in benefits costs, Labor Department data showed on Friday.

Oil fell near $95 a barrel after the U.S. government said the economy expanded at a meager 1.3 percent annual rate in the second quarter.

An advisory group said the U.S. fast-track approval process for medical devices is fatally flawed and should be replaced, but the Food and Drug
Administration said the recommendation was a non-starter.

Starbucks earnings got a jolt last quarter — profits jumped 34 percent and sales were up despite having to pay more for coffee and food.

Chevron reported second quarter profits of more than $7.5 billion. Still, with oil prices as high as they are, those profits were expected to be even higher.

Rating agency Moody’s put Spain on review for a possible downgrade on Friday, adding to concerns that a Greek rescue package has done little to halt the spread of Europe’s debt crisis.

The Obama administration is set to unveil new fuel economy standards today. Cars will have to get 54.5 miles per gallon by 2025. But European carmakers say the new rules discriminate against the models they sell here.

Illinois Gov. Pat Quinn is looking into selling ad space on the state’s license plates. It would mean extra cash for Illinois and drivers who agreed could save $100 on license fees. Forget “The Land of Lincoln,” and think “Land o’ Lakes.”

A rather sobering piece of news… Turns out Apple has more cash on hand than the U.S. government. According to the Treasury, the U.S. now has an operating budget of about $73 billion dollars. Apple has a cash reserve of more than $75 billion. Hmmm, maybe we need a Genius Bar on Capitol Hill.

A Lake County, Fla., inmate found a way to take advantage of a glitch in the lockup’s phone system. Inmate accounts are charged for calls. And are refunded if a call doesn’t go through. But the phone system was accidentally refunding twice as much money to inmate accounts. So Larry Stone started placing calls and hanging up. And doing it over and over and over again until his account racked up more than $1,200, enough to post bond and get out of jail. When other inmates started doing the same thing… jail officials finally made the connection. And Stone was rearrested. 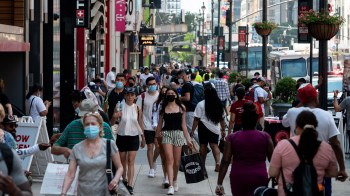