You guys! There’s another Internet!

You guys! There’s another Internet!

Researchers are testing new ways to shove data around at speeds so fast we can’t even wrap our puny human brains around it, and since this is so experimental, it doesn’t make any sense to use the Internet we all use. Instead, they’re using Internet2 and ESNet, which run on DARK FIBER. Do you feel like you’re in a Harry Potter movie yet? Dark fiber isn’t all that mysterious, though – just a bunch of cables left over, lying fallow, from the dot-com bust. From MIT’s Technology Review:

The dark-fiber test bed provides a way to test new hardware, such as devices like optical routers, which combine optical and electronic components. It could also be useful for security researchers. “It’s very hard to do ‘deep-packet inspection’ at 100 Gbps,” says Cotter, referring to a technique typically used to check for malicious network traffic. He adds that it’s important to anticipate what could happen if spammers or malicious hackers got access to very high bandwidth, and develop ways to defend against that.

Cotter also believes the new networks “open up a whole new area of research” into the power efficiency of network devices. He wants to collect data on real-time power consumption and correlate it with traffic patterns to see when the network itself is becoming an energy guzzler. Data centers have received a lot of attention for the energy they consume, Cotter says, but the energy used to move data around the world is also important. 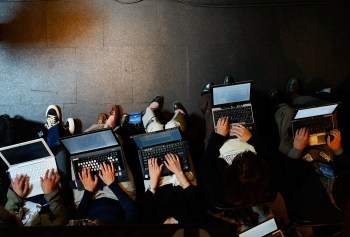