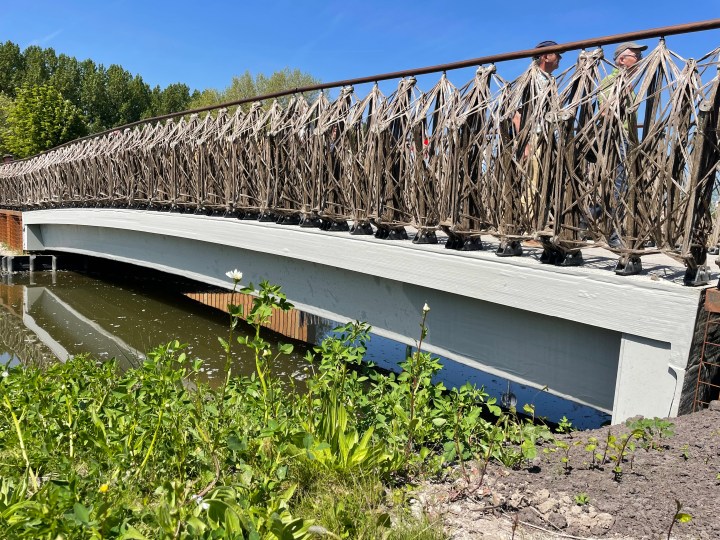 COPY
This 15-meter bridge in the Dutch town of Almere was made using flax fiber. John Laurenson

This 15-meter bridge in the Dutch town of Almere was made using flax fiber. John Laurenson
Listen Now

Elizabeth Beck, a tourist visiting the Dutch town of Almere from Pennsylvania, is standing on a bridge made of natural fiber.

“Honestly, I think it’s amazing. I actually use flax, the flax seed, for breakfast and now I’m standing on a flax bridge so it’s kind of … pretty cool!” she said.

Frans Van Der Wel is commercial advisor at FibreCore Europe, the company that built this 15-meter, single-span bridge for pedestrians and cyclists.

“Our business is making composite bridges. Normally we use glass fiber or carbon fiber even, but in this bridge we use flax fiber,” he said.

Flax is a plant with a pretty blue flower and seeds you can sprinkle on salads.

In the way steel wire is set in concrete in conventional construction, a mesh of flax fiber is set in resin that is part natural, part not. So far, this method costs about twice as much as building the standard way.

The Netherlands is full of canals and has many bridges.

“In the Netherlands, over 85,000 bridges will be replaced, renewed in the coming 20 years. And if we do that in the same way we built them there’s this enormous carbon dioxide coming out of the process,” said Jan Hoek, Almere’s deputy mayor.

They’re looking at alternatives. The Netherlands has pioneered greenhouse farming and other technological farming advancements.

In the future, he said, we’ll buy building materials from farmers.