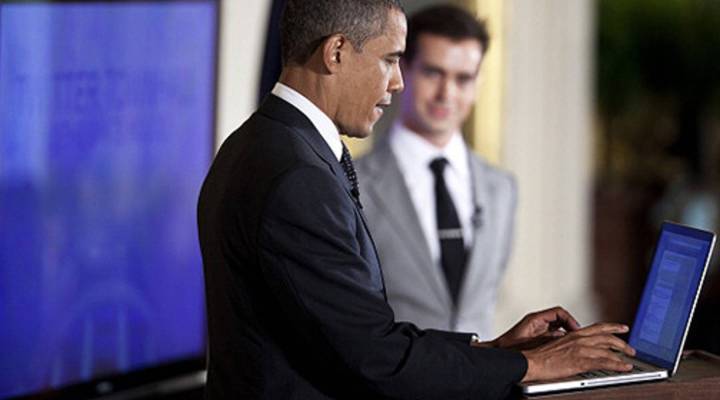 Barack Obama: I am going to make history here as the first president to live-tweet.

Kai Ryssdal: Tempting as it is to just close up shop and go home after hearing that from leader of the free world, there is actually a story or two to be told about the president’s Twitter Town Hall today. One is political, that the White House is clearly going to use social media in the 2012 campaign to make 2008 look positively retro. Another is what the presidential seal of approval means for Twitter’s corporate fortunes.

Josh Bernoff is an analyst with Forrester Research. He says Twitter wants to be taken seriously.

Bernoff: I think you’ll see Twitter concentrate on becoming a communications channel of record here, so the presence of Barack Obama on there is pretty important.

That’s because Twitter is looking to go public, which means it has to convince investors it provides a crucial service to its customers.

Sam Ford is director of digital strategies for Peppercom. He says a lot of social media companies have to prove they’re not just a flash in the pan.

Sam Ford: Some wonder whether they’re substantial or they have staying power, even though most of them have a user base that any other company would kill for.

Twitter has more than 200 million users, not that it’s figured out how to make money off of them. Jeff Jarvis is the author of What Would Google Do?

Jeff Jarvis: Twitter is an amazing beast, it really is a new way to find out what’s happening all around the world. But it still doesn’t have a business model.

Jarvis says events like the Twitter Town Hall could help attract new advertisers. Twitter’s on track to make about $150 million in ad revenue this year, which is still a far cry from what Twitter reportedly says it’s worth: $7 billion.