Bob Moon: Ah, the freedom to choose. It’s one of our most prized liberties. Especially choosing what we eat. Of course, it helps to know what we’re eating.

Tomorrow is the last day the public can weigh in, so to speak, on new rules proposed by the Food and Drug Administration. They’d require that calorie counts be posted by chain restaurants nationwide. Imagine knowing how your meal really stacks up at Taco Bell or Applebee’s. Similar laws are already in force in New York City, Seattle and across California. And that’s giving us an idea how this might affect our habits.

Nicholas Bagley teaches health law at the University of Michigan Law School. Thanks for joining us.

Nicholas Bagley: Happy to be here.

Bagley: That’s right. We know because New York City has tried; since 2008, chain restaurants in the city have had to post calorie count information. And so researchers compared the food choices that low-income children and adults made in neighboring Newark — which doesn’t require the posting of calorie counts — with low-income children and adults in New York City. And they found that calorie counts had virtually no effect on what New Yorkers actually purchased.

Bagley: Well, nobody’s exactly sure. At the outset, some people — kids especially — just don’t pay any attention to calorie counts. And for those who do see them and do register that they’re there, calorie counts can be deceptively hard to use. People may know that they shouldn’t eat too many calories, for example, but they may not know how many are too many. And for most people, the choice of what to eat is really driven by taste and cost — not calorie counts.

Moon: So you’re suggesting that maybe we need to post these calorie counts with flashing red lights for the worst ones? Or what?

Moon: One of the other questions that’s occurred to me is how are we even sure that these calorie counts that are being posted are accurate?

Bagley: We can’t be sure that the calorie counts are accurate. In 2010, researchers at Tufts actually looked into the calories at restaurant food, and they found that the restaurant food contained on average about 18 percent more calories than advertised — with some items having as many as twice as many calories.

Moon: This all focuses on the consumer’s reaction to all this, though. If the restaurants are indeed changing their menus and modifying certain items to reduce calories and sodium content or whatever, isn’t that a positive step that’s going to have some effect on what consumers do?

Bagley: It’s a positive step, but it’s too early to tell whether it’s just smart marketing. Chain restaurants, and especially fast food joints, have an image problem. People think that they’re big contributors to the obesity epidemic. If fixing up a few of their menu items can improve that image and help keep the regulators off their back, that’s good for their bottom line. But it remains to be seen whether the restaurants actually make a full-throated commitment to cut the calories for their most popular food items. I have to admit, I’m a little skeptical.

Moon: Well if that’s true, what would have an effect?

Bagley: Combating obesity requires a mammoth social commitment. Posting calorie counts just doesn’t cut it. We don’t need people to eat better in restaurants; we’ve got to get them out of those restaurants and into their kitchens. And perhaps most challenging of all, we’ve just got to change people’s attitudes about food.

Moon: Nicholas Bagley is an assistant professor at the University of Michigan Law School. Thanks for burning a few calories with us.

Bagley: Happy to do it. 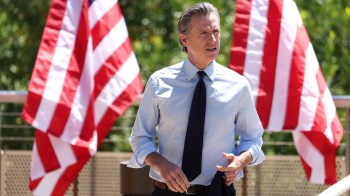