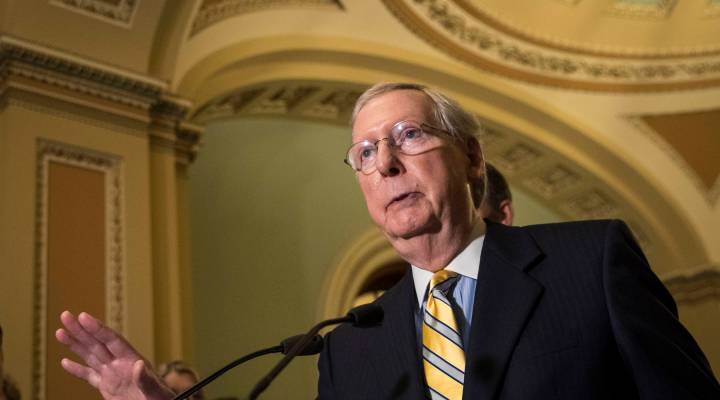 COPY
Legislation is “like an old Roman city,” says Nicholas Bagley, a law professor at the University of Michigan. The original is on the bottom and amendments are layered on top. To understand legislation, you have to know how it's changed, he says. Above, Senate Majority Leader Mitch McConnell speaks to the media in June to announce that the Senate GOP will delay a vote on its health care bill until after the July Fourth recess.  Drew Angerer/Getty Images

Legislation is “like an old Roman city,” says Nicholas Bagley, a law professor at the University of Michigan. The original is on the bottom and amendments are layered on top. To understand legislation, you have to know how it's changed, he says. Above, Senate Majority Leader Mitch McConnell speaks to the media in June to announce that the Senate GOP will delay a vote on its health care bill until after the July Fourth recess.  Drew Angerer/Getty Images
Listen Now

Congress is still off for its Fourth of July recess. They’re back next week which means, at least on the Senate side of the Capitol, healthcare. Majority leader Mitch McConnell has said he’s re-working his bill. But here’s the thing, if you actually sit down and read the actual text in the 145-page draft of the Better Care Reconciliation Act, it’s really hard to understand. So, we called in an expert to help us read it.

Nicholas Bagley is a professor of Law at the University of Michigan, he talked Marketplace host Kai Ryssdal through some of the legalese in the Senate healthcare bill. The following is an edited transcript of their conversation.

Kai Ryssdal: Let me, first of all, ask you how you think about reading these bills. Because you are not a lay person in this field, you have some expertise. So how do you go about it?

Nicholas Bagley: Well, it’s hard. These bills are the latest layers that are added on top of many, many other bills that have come before in the health care space. And so when you read a bill, what you have to do is have all the bills that came before at hand so you understand when they say, “We’re amending subsection A of subparagraph one,” you know what that’s referring to.

Ryssdal: All right, so let’s dive in here. I want to get you to section 134 of this bill. The block title is “Flexible Block Brant Options for States” and it says, and I got a quote the law here because I need you to take this apart for me, “Title 19 of the Social Security Act as amended by section 133 is further amended by inserting after section 103 the following new section” and then it goes on. So first of all, are we going back to the Social Security Act of 1930 or whatever it was here?

Bagley: Yep, we’re going right back to when the Social Security Act was first adopted. … Title 19 of the Social Security Act, however, was added in 1965 and it refers to the Medicaid program, which is the joint federal-state program of health insurance for poor people. Section 134 says, “Hey, states, you traditionally will cover health care for your residents. We’ve decided to put a cap on how much we’re going to help you spend, but we’re going to come up with another option for you, too: If you want to take federal money and use it however you see fit to provide health care for your citizens, we’ll give you a block grant.” And that Section 134 of the act, which you’ve been talking about, is this block grant option. Some states will take it. Some states won’t. But it’s one of the things that has opponents of the Senate bill up in arms.

Ryssdal: And you have to sit there with all those bills back to the Social Security Act to figure out what’s going on?

Bagley: You have to know what it’s targeting. You have to pull up the U.S. Code. I mean, all legislation is kind of like an old Roman city, right? The lowest layers are the things that happened first, and then over time, amendments and changes are layered on top. And to understand it, you really have to read how the statue has been shaped and reshaped over time.

Ryssdal: All right, let me dig into another slice of this, which is that not only do you have to peel back the layers, you have to know your dates and your details. Section 119, “repeal of net investment tax subparagraph A in general, subtitle A of the Internal Revenue Code of 1986 is amended by striking Chapter 2A” blah, blah, blah, yada, yada, yada. And then it gets to effective date, “The amendment made by this section shall apply to taxable years beginning after December 31st, 2016.” So obviously a year or something in the past, what does this mean? What is the net investment tax and what does that date have to do with reality?

Ryssdal: Sorry, I apologize for laughing.

Bagley: No, it doesn’t look it, but it really is. It wipes out a 3.8 percent tax that Obamacare imposed on the capital gains of people who make more than $200,000 a year. The point of repealing this tax on capital gains is to encourage people to invest more of their capital. And whatever you think about that goal, all the action is really in the effective date of this statute, because the provision is retroactive to the beginning of this year. And it can’t possibly affect investment decisions that have already been made. So what we’re seeing is the Senate bill offering a pure giveaway to some of the wealthiest Americans kind of lodged in a very technical, dry provision of their health care legislation. You know, reading statutes is all about the details. And when members of Congress want to hide something or don’t want the public to notice, they will use squirrelly language, they will use anodyne language to make it seem like they’re not doing very much. But the devil is always going to be in the details.