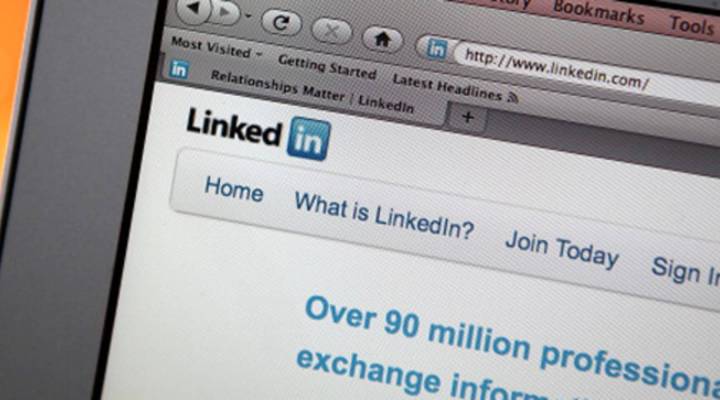 COPY
In this photo illustration, the LinkedIn logo is displayed on the screen of a laptop computer on January 27, 2011 in San Anselmo, Calif. Justin Sullivan/Getty Images

In this photo illustration, the LinkedIn logo is displayed on the screen of a laptop computer on January 27, 2011 in San Anselmo, Calif. Justin Sullivan/Getty Images
Listen Now

Kai Ryssdal: There’s a big IPO scheduled on Wall Street for tomorrow, one that was supposed to be something of a sleeper. LinkedIn, the networking site that focuses on professional contacts, is going public in the morning. It’s been doing fine; the initial stock sale was supposed to weigh in at around $2.5 billion.

All of a sudden, though, LinkedIn’s the hot new property on Wall Street. The company is now set to raise almost $4.5 billion at the opening bell tomorrow. We sent Marketplace’s Stacey Vanek Smith to see what lit the match under LinkedIn.

Stacey Vanek Smith: For all the stardust around social media sites, LinkedIn doesn’t get much attention. But tomorrow, the entire tech world will be watching as the company puts its shares up for sale. Sam Ford is director of digital strategies with Peppercom.

Sam Ford: People are watching this IPO as an indicator of what might be to come for Facebook, for Groupon, for a lot of other big and emerging names in the social media space.

Facebook and Groupon are all expected to go public within the next year or so. Those IPOs would be around 10 times larger than LinkedIn’s. But LinkedIn could be a crucial indicator of how social media plays out on public markets.

Josh Bernoff is a social media analyst and author of the book, Groundswell.

Josh Bernoff: LinkedIn is clearly still developing as far as profitability goes. The question of whether a successful but not incredibly profitable company can have a successful IPO, that’s a question that a lot of companies are going to be interested in.

LinkedIn has already said that it expects to lose money next year as it invests in expanding. That might not play so well on quarterly-earnings-obsessed Wall Street. And there’s another real concern for investors, says Peppercom’s Sam Ford: most of a social media site’s value lies in its popularity.

Ford: How can you guarantee that LinkedIn or Facebook won’t become like Friendster or MySpace, five or six years from now?

You can’t. But what investors will be most concerned about tomorrow is what happens to LinkedIn’s stock price in the next few weeks.