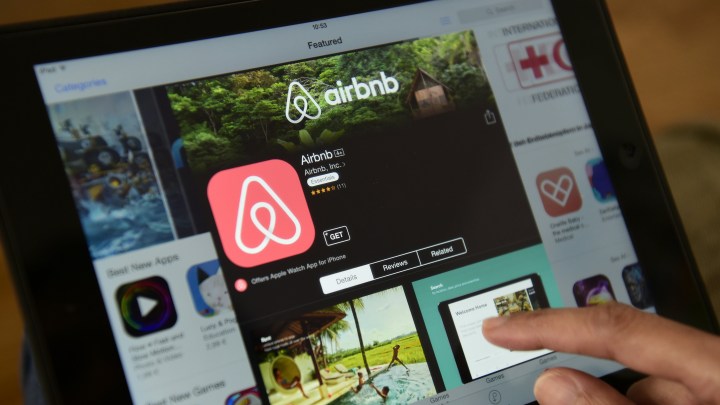 COPY
Airbnb was planning an IPO back in March, but the pandemic threw a wrench in that plan. John MacDougall/AFP via Getty Images
COVID-19

Airbnb was planning an IPO back in March, but the pandemic threw a wrench in that plan. John MacDougall/AFP via Getty Images
Listen Now

It’s a big week for IPOs in what’s turning out to be a very big year. The meal-delivery service DoorDash is expected to raise more than $3 billion when it starts trading publicly on Wednesday. Airbnb will follow on Thursday, hoping to net around $3 billion as well.

On Monday, the short-term rental company increased its expected price range for the IPO to between $56 and $60 a share, which would put the company’s total value at as much as $42 billion. That would be quite a comeback from earlier this year, when the pandemic upended the whole business model.

Airbnb was planning an IPO back in March, but we all know what happened that month. As global travel ground to a halt, its bookings fell by 80%, and the company had to refund a billion dollars.

“I felt like a captain of a ship, and a torpedo just hit the side of the ship,” CEO Brian Chesky told Bloomberg this summer.

The company laid off a quarter of its staff — nearly 2,000 people, cut executive salaries and marketing, and focused on the core short-term rental business.

By September, it was profitable again. As domestic travel picked up over the summer, Airbnb offered something hotels didn’t, said Tarik Dogru, who teaches hospitality management at Florida State University.

“It’s all yours,” he said. “You are not going to, if you don’t want to, encounter with the host, and some people really shifted, I think, to Airbnb.”

Not everywhere. In big cities like New York, Boston and San Francisco, demand for short-term rentals is still down 40% to 60% from a year ago, said Jamie Lane, who tracks bookings at AirDNA.

“But where demand is up, and it’s up significantly, is in small towns and destination markets throughout the country,” he said.

Places that are an easy drive from metro areas, like Big Bear, California, outside Los Angeles, and Gulf Shores, Alabama, near the Florida panhandle, have seen bookings rise, Lane said. And with more people able to work or attend school remotely, they’re staying longer, too. The average length of a stay has grown from three to four days in 2019 to six to seven days this year, Lane said.

“Where you might have just gone for a weekend before, now you’re staying a week,” he said.

But there’s another reason to go public now, said Kathleen Smith with Renaissance Capital, as investors chase returns in a hot stock market. Companies have raised more than $140 billion so far this year, according to Dealogic, with several large IPOs to come.

“It may be one of the worst years when it comes to the pandemic,” said Smith. “But it has been one of the best years for IPOs.”