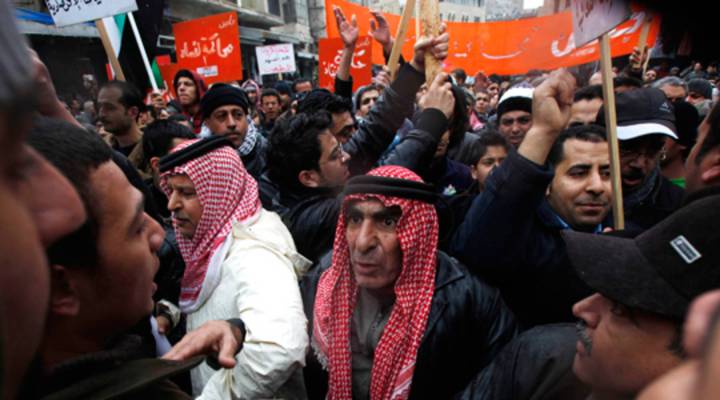 p>Marketplace reporters Stephen Beard and Alisa Roth traveled to Amman, Jordan, this week to cover the growing discontent in that country and around the Middle East. Follow their coverage on air and online. (Photo by Salah Malkawi/Getty Images)

The issues underlying protests in the Middle East are in many cases economic. The countries that aren’t oil-rich have high unemployment, rapidly growing populations of young people, a vast gulf between rich and poor, and autocratic regimes that enrich small elites at the expense of economic opportunity for everyone.

When global prices for food and fuel rise, they feel pain, despite government subsidies. The oil-rich states differ mainly by having oil, which allows them to subsidize their people more generously.

Implications for the U.S.
The United States has important investments in this region, both business and political. The region’s stability is critical to the global economy.

In addition, the Middle East offers dramatic examples of what happens when poverty is the norm amid extreme wealth, when education doesn’t lead to economic opportunity, when the financial interests of those in power overwhelm the general good, when business is ruled by favoritism and bribery.

Marketplace returns to the Middle East
Marketplace broadcast from Cairo and Dubai for two weeks in 2008, reporting on the progress made in breaking these longstanding patterns. One global financial crisis later, we’re now back in the Middle East, reporting on what happens when that progress falters, and how it affects the region, the United States, and the global economy.

George Judson is the Managing Editor.