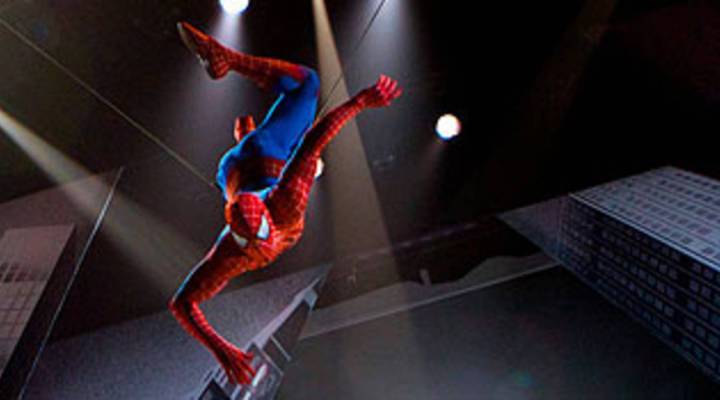 Kai Ryssdal: The actual title of the new Spider-Man musical on Broadway is “Turn off the Dark,” but you’ve got to wonder if at this point it should just be “Turn it Off.”

The show’s had way more than its share of problems: postponed openings, serious injuries, countless technical difficulties. This morning, the New York Times weighed in with its official review. And let’s just say words like “calamity,” “cheap-looking” and “tedious confusing tripe” took center stage. And that’s for a show that’s not even open yet.

Stacey Vanek Smith: $65 million have been poured into “Spider-Man Turn Off the Dark.” The show features elaborate sets, complicated wire-work, a famous director and music by Bono.

Clip from “Spider-Man Turn Off the Dark”: See how the boy falls from the sky.

But for most people, Spider-Man the musical has become synonymous with disaster. At TKTS in Times Square, Nick Angelo says he’s definitely heard about “Spider-Man.”

Nick Angelo: I heard it would open for one night, someone would die and it would be off for two weeks.

Porter Bibb: Check the box office: “Spider-Man” is booked solid and selling out night after night.

The show’s not officially open; people have been buying tickets to see preview performances. Leonard Jacobs is the editor of arts newsletter, the Clyde Fitch Report.

Leonard Jacobs: I think half of the people that are going want to see if somebody falls another 20 feet and breaks their back.

Jacobs says with all of the problems and delays, critics had a right to break with tradition and review “Spider-Man” before opening night. He says the bad reviews won’t hurt sales for now, but could once the morbid curiosity dies down. And “Spider-Man” would have to play to sold-out houses for an estimated four years just to break even.

Back in Times Square, Nick Angelo says all of the bad news has intrigued him.

Angelo: If it’s so bad, I would love to go see it and just be like, that was so horrendous. But I guess it all just depends on how much money I’m spending to see it.

“Spider-Man” tickets are among the most expensive on Broadway.