Sara Lee announced it’s going to split into two separate companies. It may be a result of having tried to take on too many different brands earlier. GDP went up 3.2 percent in the fourth quarter of 2010, its highest increase since the recession started in 2007. But don’t get too excited yet. Congress is considering allowing states to declare bankruptcy, and that’s worrying the municipal bonds market. While big Wall Street banks look to be getting back on track with profits, smaller banks are still struggling. Umpqua Bank in Oregon has been taking a route far less traveled. And protest and turmoil continues in Egypt, as the government proceeds to shut down Internet and social media access. We also had the Weekly Wrap on the World Economic Forum in Davos, and heard some stories that didn’t make the headlines. Here are the songs we played: 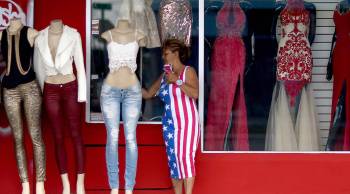 Who run the world? GDP.

How can mobile payments in China be greater than GDP?