Kai Ryssdal: Wal-Mart and Michelle Obama. That’s where we begin the broadcast today. The First Lady and the first retailer teamed up this morning for an announcement about healthy food. Wal-Mart — which is also this country’s biggest grocer — said it’s going to put a lot more foods that are lower in ingredients like fat and salt on its shelves by 2015. The company says it’ll also squeeze costs out of the supply chain to bring down sticker prices for fresh fruits and vegetables.

A lot of companies have been getting on the healthy-choices bandwagon, but Wal-Mart and the White House might actually be able to change things. Marketplace’s Mitchell Hartman reports.

Mitchell Hartman: The folks at the Center for Science in the Public Interest — sometimes called the ‘food police’ — are often skeptical when big companies claim to ‘get religion’ on nutrition. Not this time, though. Executive director Michael Jacobson.

Michael Jacobson: Traditionally, supermarkets have been very neutral. And it’s great that a supermarket chain is using its marketplace muscle to encourage its suppliers to provide healthier foods.

Of course, Wal-Mart isn’t just any supermarket. 140 million Americans walk through its doors every week. If reducing fat, sugar and salt to is the price of being at Wal-Mart, companies like Kraft and General Mills are likely to comply. They’ll have no choice.

But consumers do have a choice. Market researcher Harry Balzer at the NPD Group says Americans actually have a history of walking away from healthier foods after the initial fad wears off.

Balzer: In the end, if you can make health easier, or cheaper, than what I pay for food right now, we will go there.

Which explains Wal-Mart’s other new initiative: lower prices. The chain says it’ll take $1 billion a year off the cost of fresh fruits and vegetables.

Bruce Babcock is an agricultural economist at Iowa State and he says Wal-Mart can do this without shortchanging farmers on their apples and broccoli.

Bruce Babcock: They will likely be able to offer farmers a price that may be lower than the competition, but the farmer’s better off because it’s such a large volume and the reliability and the timing is just perfect.

These announcements are also perfect timing for Wal-Mart. It’s trying to expand in urban areas, and faces opposition from unions and neighborhood activists. 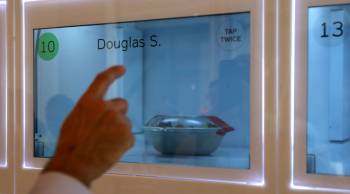