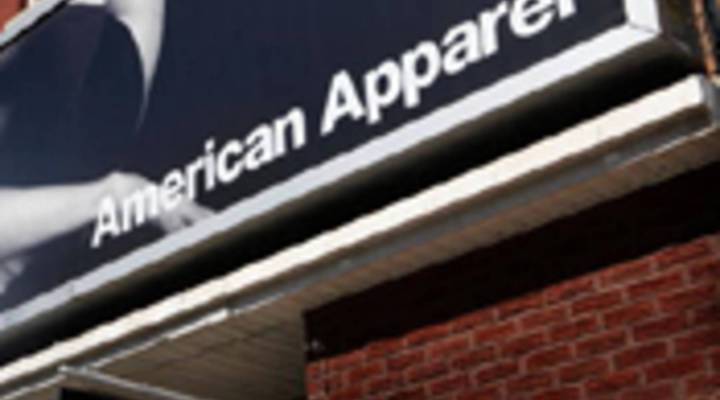 Kai Ryssdal: There is a certain set of not-so-secret code words that corporate America uses to let people know what’s really going on with them. American Apparel, the once hip but now deeply troubled clothing company, used two of ’em today.

First of all, it released what are called “preliminary earnings,” giving Wall Street analysts a sneak peak at the official bad news to come. And then, in that earnings announcement, it said there’s some doubt that it can continue as a “going concern.” They might as well have said they’ve got the bankruptcy papers all but signed, because that’s what usually follows news of not being a “going concern.” The company’s expected to lose as much as $7 million in the second quarter. Sales have been dropping for a year. It’s not that the market for striped tights and silver lame jumpsuits has dried up.

Stacey Vanek Smith reports this is a case of a company whose eyes were a whole lot bigger than its stomach.

Stacey Vanek Smith: It’s been a hard couple of years for retailers, but for American Apparel, it’s been really hard. Sales have been dropping roughly 10 percent a month, it’s millions of dollars in debt and it’s come under attack for everything from Lolita-esque ad campaigns, to hiring illegal workers to its wild-card CEO — who once told the Wall Street Journal, his company’s chief financial officer was “a complete loser.”

George Whalin: It’s never been a really professionally run business. It’s kind of been run as a game.

That’s retail analyst George Whalin. He says American Apparel thrived for years, because of its edgy fashions, cool anti-establishment reputation and good press for making its clothes in the U.S. But that last part meant the company’s expenses were a lot higher.

Whalin: The concept of making and selling American-made clothes is a very good one, but you have to have a well-run organization to do it. If your costs are higher, you’ve got to do other things to be better.

Andrew Jassin: It looks like the company that needs the help of the courts in a bankruptcy.

Jassin: Perhaps a deal taking the name American Apparel and parking it in another retailer like Target or Wal-Mart.

Or Jassin says a private buyer could take over the company, but a bankruptcy would probably have to happen first.