The Mid-Day Update is a five-day-a-week podcast from the Marketplace Morning Report co-hosted by Bill Radke and Steve Chiotakis that wraps up the morning news in a fun little package. Listen here every day at 10 a.m. PT or download it to your iPod by subscribing to the Morning Report Podcast:

All day today, BP is testing the new cap on its oil well. The tests could last from six hours to two days and the company will monitor it at “very minute intervals.” BP shares have been rising for two weeks.

The government said this morning the U.S. trade deficit widened in May to the highest level in 18 months. The rebounding economy pushed up imports of foreign-made cars, computers and clothing. Exports rose by a lesser amount.

The National Federal of Independent Businesses released its monthly survey of small business optimism. It fell in June. Very few small businesses plan to create new jobs. The number of owners planning to make capital expenditures over the next few months is near a record low. More of them expect declining sales than higher sales. Big contrast between small businesses and huge ones.

Alcoa and CSX, which reported better-than-expected earnings — both volume and sales are improving, which is what analysts wanted to hear.

It’s the 25th anniversary of the Live Aid fundraiser for African famine relief. Changed the business of charitable fund raising.

General Motors says if you order certain 2011 Corvettes you can pay $5800 and your own travel to a GM plant where you assemble the engine yourself under supervision. The warranty will still apply.

It looks like financial reform has the votes. Republican Senators Scott Brown and Olympia Snowe are on board. The Senate is expected to pass it this week and send it to the president.

Tiger Woods is switching to a Nike putter for the British Open, after using Titleist ever since he turned pro. It’s not good when Tiger Woods is dumping you.

Yankees owner George Steinbrenner has died. He will now hire all the best souls in heaven to work for him. 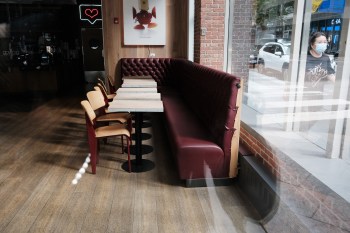 What if delivery vans took your stuff away instead of dropping off packages?