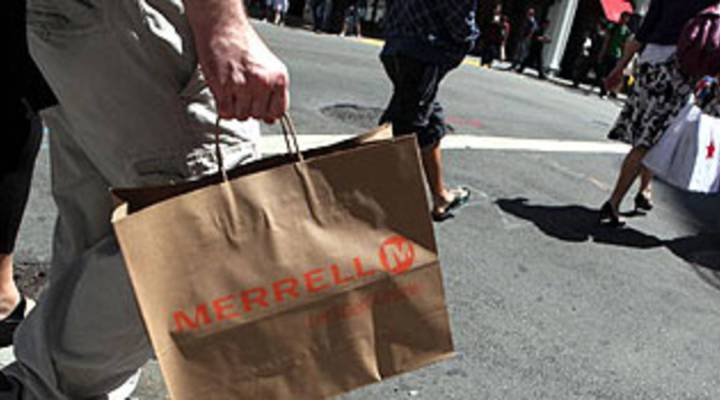 The particulars of today’s episode of economic problem solving are these. First, there was a survey out this morning from Thomson Reuters and the University of Michigan that said consumer sentiment — basically, how optimistic we are about the economy — is near a 2.5-year high. Also out today, though, data from the Commerce Department showing retail sales fell for the first time since Thanksgiving. What gives?

“I’ve never seen things like this,” says Beemer, who’s been studying consumer behavior for more than 30 years. “Consumers really have what might be described as an ‘apple cart upset’ in their heads.”

And economists, like PNC Wealth Management’s Bill Stone, say we should give a darn.

“Every recovery we’ve ever looked at in the United States has seen the consumer come back before employment. So we saw the consumer start to spend, frankly, before you saw any good news on the employment front,” says Stone.

“Often when we’re at a turning point in the economy, the data get very noisy,” says Coronado. “There’s a lot of bouncing around.”

Coranado says consumers do feel better, and now they’re reassessing how much they save and spend and how much credit they have.

“I do think we have a new consumer. Consumers are much more cautious in their spending — they’re cautiously optimistic,” she says.

Coranado says people will start shopping again when they have a better handle on their own situations and other parts of the economy settle down.

As Scarlett O’Hara said in “Gone With the Wind:” “I can’t think about this now, I’ll go crazy if I do. I’ll think about it tomorrow!”

After all, tomorrow is another day and another economic indicator.