Toronto locals ‘in the dark’ over ID-access fence around downtown

Toronto locals ‘in the dark’ over ID-access fence around downtown

Meaghan Gray with the Toronto Police G20 Planning Team says people who want to get past the security fence downtown will have to show ID and say where they’re going and why. Some 40,000 people who live and work in the area can apply for a special ID to get through faster — and many have.

Meghan Gray notes the device looks like a credit card, though you can’t use it the same way. She says the point is to make things easier on Torontonians. But the Canadian Civil Liberties Association wasn’t pleased; applying for the special passes means giving the cops your name and address, and normally they keep names and addresses for a year. But Gray says they’re not doing that in this case. “The information will be destroyed immediately following the summit.”

I thought this might help put the locals at ease, but Albert Serfaty, who runs a printing shop within the perimeter, says he’s more concerned about losing business. “That’s what’s going to happen, we’re all going to take a hit. And everybody I spoke to in the area is not happy about it.”

Besides, he says, suppose everybody who lives and works downtown dpes try to get through the fence with the express pass. “Does that mean there’s gonna be 300 or 400 [eople lining up to get in? Nobody really knows. All I know is it’s a pain.”

And this is what I hear over and over again the more I talk to people all over Toronto. We’re in the dark, they say. Gray says the police are doing their best to keep everyone informed, but even they aren’t sure yet how many check points there’ll be or exactly when the fence will be locked. They do plan to hand out the special passes well before the summit, just in case they need to lock down downtown a week early. 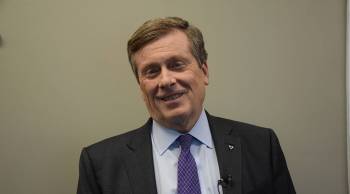