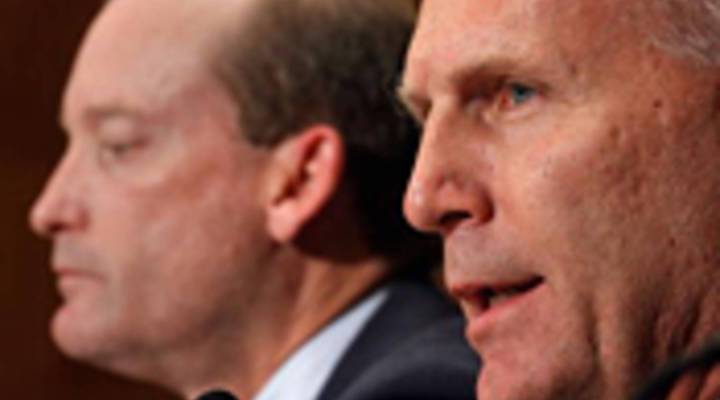 Stacey Vanek-Smith: The big-oil blame-game continues on Capitol Hill today as legislators try to figure out who is responsible for the catastrophic oil leak in the Gulf of Mexico. Word today a key safety device, the so-called blowout preventer, had a leak which contributed to the explosion that killed 11 workers and sank the drilling rig. Meanwhile, the White House has unveiled legislation to raise the cap on damages from offshore oil drilling. John Dimsdale reports.

John Dimsdale: The current liability cap is $75 million. The White House hasn’t set a new limit, but members of Congress are talking about setting it at $10 billion. The new liabilities would be made retroactive to the current spill.

On a conference call with reporters this morning, White House energy adviser Carol Browner, said the extra costs to taxpayers from this spill will be covered by the well’s owner BP.

Carol Browner: We take BP at their word. They say they intend to pay for all costs. And when we hear all, we take it to mean all.

The proposed legislation increases unemployment benefits, even for usually ineligible self-employed workers — that means fishing boat owners in the Gulf would be covered. The bill also increases spending on inspections of seafood coming from the Gulf and tightens regulations of oil rigs. The White House wants congressional action on its proposals in the next few weeks.

Stacey Vanek-Smith: Oil testimony continues today on Capitol Hill. So far there’s been a lot of finger-pointing over which company is most at fault for the oil rig explosion and leak in the Gulf of Mexico. Yesterday, senators grilled the oil executives; today, it’s the House of Representatives turn. Here to talk about this with us is our Washington bureau chief, John Dimsdale. He joins us live. Good morning, John!

Vanek-Smith: John, we’ve heard all the context now, but will lawmakers focus on any specific problems today?

Dimsdale: Well, it became clear yesterday that something happened with the cement that surrounds the well head on the ocean floor. The cement work had only been completed just a couple days before the explosion. And apparently, not all of the final testing of the integrity of that cement had been done. In yesterday’s hearing, Steven Newman, the CEO of the drilling rig’s owner, Transocean, tried to steer congressional attention in that direction:

Steven Newnam: The one thing we do know is that on the evening of April 20, there was a sudden, catastrophic failure of the cement, the casing, or both. Without a failure of one of those elements, the explosion could not have occurred.

Vanek-Smith: So John, it sounds like each company is pointing their finger at the other company. Do you see the blame game continuing today?

Dimsdale: Yes, with an additional source of blame. We hear for the first time today from the manufacturer of the blowout preventer, a company called Cameron. That’s a heavy piece of equipment, it’s designed to avoid just the surge of oil and gas that caused the explosion and ultimately the spill. The other companies yesterday said that the failure of that blowout preventer also contributed to the catastrophe.

Vanek-Smith: What could come out of these hearings?

Dimsdale: Well the aim is to have higher standards, perhaps more testing, more redundant back-up plans for this type of drilling that’s taking place at deeper and deeper levels.