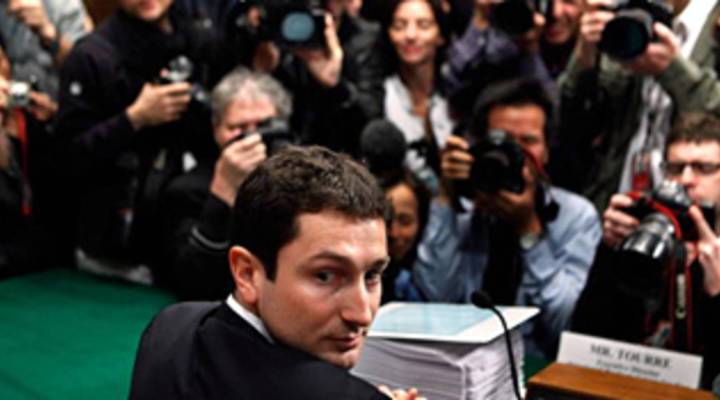 Stacey Vanek-Smith: Goldman Sachs executives go before Congress today. They’re accused of fraud and of profiting from the housing collapse to the tune of $3.7 billion. Here to talk Goldman with us is Gillian Tett, U.S. managing editor for The Financial Times. She joins us live. Good morning, Gillian.

Vanek-Smith:Vanek-Smith: So a lot of internal Goldman e-mails have come out in recent days that seem to indicate Goldman knew the housing market was going to crash. How significant are these e-mails?

Tett: I think the e-mails are very significant, because they shed light on what until now has been a very murky world that nobody outside Goldman’s or the banking industry could actually see. And they confirm what people have long suspected, which is that banking had spun off into a little planet of its own, pretty semi-detached from the rest of society,where it was viewed as entirely normal to be trying to bet that the mortgage market would crash and to profit from that.

Vanek-Smith: Hmmm. Goldman CEO Lloyd Blankfein has said he won’t settle with regulators. Considering these e-mails that have come out and how damaging they might be, is Goldman’s reputation at risk if things drag on?

Tett: Absolutely. I mean almost irrespective of what happens now in the law courts, Goldman has been judged guilty in the court of public opinion — in the court of the politicians, if you like. And if this drags on and on, no matter what Goldman says, it’s going to very much damage its claim that it always puts clients first, that it always tries to uphold good values.

Vanek-Smith: One of the more surprising things that Blankfein is expected to say today is that he understands why people might question investment banking and its role in the economy. And indeed, it can sometimes even be hard to explain what investment banks do. Would it be a bad thing if investment banking went away?

Tett: Well I think that something that people have fundamentally forgotten in recent years is thank banking is a utility — it has a utility function like, say, the water industry or the electricity industry, and it produces something which is good for the rest of society and gets things done. And nobody would tolerate a situation where water companies were endlessly being created with their water and trying to slice and dice it to make more money off the back of water. And in the same way, we need to ask ourselves why has banking become so complex? Is it actually bringing about wider social good or not? And I think certainly if you look at the story of CDOs, atop of things which are discussed in the Goldman’s e-mail, it’s very hard to say that that’s actually been good for the economy as a whole.

Vanek-Smith: Gillian Tett of The Financial Times. Gillian, thank you.

Goldman Sachs
Tags in this Story
Share this Story