Radke: So I understand the president’s trying to merge different bills that we have heard about before. What is new and different about his plan?

Warner: Well we have a new acronym to learn: HIRA. It stands for the Health Insurance Rate Authority. And this would be a federal commission with the power to regulate insurance premiums. The idea is the commission could say no to a company that wanted to raise rates, like we saw with Anthem Blue Cross proposing premium increases of up to 39 percent.

Radke: Right, but Gregory, don’t the insurance companies say they raise premiums because the cost of health care is going up?

Warner: Well, the idea is this would force insurance companies to strike better deals with hospitals. I spoke to Catherine McLoughlin from Mathematica Policy Research:

Catherine McLoughlin: If they feel the pressure to keep costs down because they can’t pass it on to the consumer in a higher premium, they may be able to exercise some of their market power to negotiate better fees from the provider.

Radke: And Gregory, what about paying for all of this? What’s the president proposing?

Warner: Well you remember the Senate proposed a tax on cadillac plans meant to cut down on the really plush benefits plans that encourage overuse and drive up cost. The criticism was a lot of those plans aren’t so plush, they’re just plain ordinary plans in high-cost areas. So Obama would bring back that tax but lift the threshold of a cadillac plan to $27,500. Not surprising, at least one senior House Republican has already rejected the whole proposal. We’ll have wait til Thursday to see what happens at the bipartisan summit.

Radke: And we’ll talk to you about it then. Marketplace’s Gregory Warner, thank you. 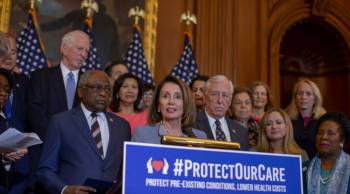