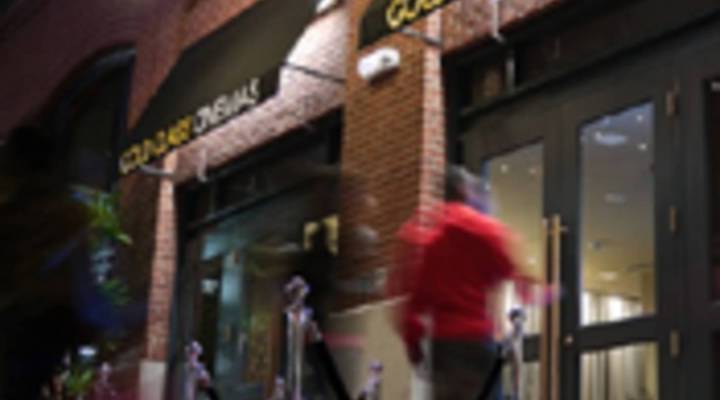 What Were You Thinking?

COPY
Gold Class Cinemas Josh Rogosin
What Were You Thinking?

TESS VIGELAND: Oscar nominations will be announced on Tuesday. Now why are we even mentioning that news here? Uh… have you seen the price of a movie ticket? Now, I’m not one to grouse about how I used to go to the talkies for, what, five, six bucks when I was a kid. I’ve even paid as much as $15 for one of those theaters where you can reserve your seat. And that’s pretty much my limit. So when I saw a new theater open in my neighborhood where the ticket price was $29, I wondered, what could they possibly be thinking?

Concierge at Gold Class Cinemas: I have two for Sherlock Holmes at seven o’clock. Do you have a credit card I can start your food and beverage tab with?

Gold Class Cinemas opened last month and got instant buzz all around town. Even here in Hollywood, $29 sounds like a lot to pay for a movie, in the middle of a recession. Right?

Laura: I think it’s expensive. It sounded like a lot to me.

That’s my friend Laura. And we were chatting just around the corner from the Gold Class lobby. She is an avowed on-the-couch-at-home-with-hubby movie watcher. And she was almost indignant when I asked if she’d be interested in buying a $29 ticket.

Same with my other friend Gloria.

Gloria does like to go to the movies. But at a tiny neighborhood theater, not the local multiplex.

Gloria: The bargain matinee that charges $2 for the first show and $3 at all other times.

This is a woman, however, who will spend good money — and I mean GOOD money — to see the opera. It’s different, she insisted. It’s an experience that she has valued at sometimes hundreds of dollars for two to three hours of entertainment, kind of like a movie. I asked Gloria and Laura and a few other 40-and 50-something friends to form an entirely unscientific focus group to evaluate $29 movies. They agreed… Once I said we’d pick up the tab.

Concierge: You’re just going to head down the two sets of escalators and a host will great you at the bottom.

Vigeland: OK, thanks so much.

Now we’ve heard from the you’ve-got-to-be-kidding crowd, but not everyone thought it was entirely nuts.

Dan: I think it’s kind of a one-time experience.

That is my husband, Dan. And take note: He will not be the last person to use that word “experience.”

Dan: But I think to do it more than once or twice a year is probably too much for most people.

Karen: I normally would pay about 9.50 for a matinee. Whether this experience is $20 better than what I would normally pay is what I’m looking forward to finding out.

Karen noted that she could rent an awful lot of movies from Netflix for $29. But two in the crowd, though didn’t hesitate.

Kevin: I would spend $29 for a movie ticket. Just has to be a really great show.

Kevin: You know, I’m a huge movie fan so I absolutely would pay this amount of money. What messes up a movie for us is the crowd. People are talking, a two-year-old’s hitting me on the back of the head with popcorn, you know, not good for me.

So what is it that makes some of us react immediately with a “no way” and others with a “sure, why not?”

Frank Murtha: People associate movie theaters with something that should cost about 10 bucks.

We interrupt this story to bring you The Expert. Frank Murtha studies behavioral finance at the consulting firm MarketPsych.

Murtha: If you make it about the experience, it’s a lot harder to quantify. It’s a unique experience, you’ve never done anything like that before, just the pure novelty of it makes the experience something different.

And, perhaps, worth more of your money. He likens this to people who save their last pennies to buy scalped Super Bowl tickets. We all have different limits on what’s crazy. And we’re often willing to shell out for something that’s out of the ordinary. So let’s get to the pitch for the $29 movie ticket.

Mark Mulcahy: It’s really a better value, and it’s a better night out.

That, of course, is the marketing chief for the theater chain, Mark Mulcahy. He says they expected 7,000 customers in their first month. Instead, they got 14,000. And what brought them? Well, here’s a sampling of what you’ll hear when you first sink into the enormous recliners inside the theater doors.

Hostess: Quickly, what we have on the outside armrest you open those up, you can store bags, coats, anything you like in there. OK, and then the green button on your tables, if you push that button, it’s actually a call button, it’ll turn red.

And on top of reserved seating, no advertising, in-theater dining and cocktails and of course, the show, Mulcahy says a little back-of-the-napkin math will show that $29 just might be cheap.

Mulcahy: If you were to go to dinner and a movie, you were to go to a restaurant of similar quality and go to a multiplex, we’re gonna get you outta here for the same amount of money. We’re also gonna save you time. If you’ve got kids at home and you’ve got a sitter, you just saved on two hours of babysitting costs. We’re also going to save you on gas and parking, because it’s all gonna happen right here.

And so with menus in hand, our focus group went, “Up in the Air.”

George Clooney in “Up in the Air”: To know me is to fly with me. This is where I live.

Murtha: If they feel like all I did was see a movie for $29, it’s not worth it. However, if it gets classified as a different experience, who knows if $29 is too much. That might be the bargain of the century.

So, I did a survey as the lights came up.

Vigeland: Any change of heart about paying $29 for this experience. Gloria?

Gloria: No. Not for me. It was a very enjoyable experience, but $29 is a lot to pay for admission alone.

Dan: I think the experience takes a little getting used to.

Vigeland: But what about the price point? Does it change your mind at all?

Dan: I would come more than once or twice a year.

Vigeland: Karen what changed your mind?

Karen: I was envisioning seeing something like a “Harry Potter” movie, which would normally, the audience would be filled with kids. And coming here and not having to deal with one single child, because they’re not going to pay the $29.

Vigeland: So Kevin, did it confirm it for you?

Kevin: Oh for sure, for sure. Again, not for every single movie that I would see, but I would definitely pay again.

Vigeland: All right and, Laura, you were a major doubter before arriving.

Laura: And I moved from “no way” to “I would for a special occasion.” It wouldn’t be frequent, but I would. No kids, good food, although I couldn’t always see what I was eating, but…

Vigeland: So I’m curious, what do you think that tells you about how you make evaluations of what’s worth spending your money on? Because you said “no” off the bat.

Laura: I did. It was a Pavlovian reaction, I have to admit. And I thought about your question earlier and I think I do that. I look at things that seem expensive to me and automatically think I won’t like it. And so, a little taste of something, a little sample here and there, definitely changes my opinion. It opens my mind.

My mind going in? Fifteen bucks was about right. As I sat there — I added another five for no cellphone signal, five for cocktails delivered to my seat and, sure, let’s say another four for no little legs kicking me through the movie. Yeah. That’s what I’ll be thinking next time I pay $29 to see a movie.

We’re going to ask this question “What were you thinking” every couple of weeks. What makes us do what we do with our money. So send us your stories.