Steve Chiotakis: There’s a new fad in sports drinks. We just told you about orange juice, well big beverage companies are investing millions of dollars in coconut water. Marketplace’s Jeff Tyler tells us they’re betting American consumers will drink it up in groves.

Jeff Tyler: Many Americans have heard of it:

Harry Belafonte: Get your coconut water.

Harry Belafonte and other singers have touted the tropical cure-all for years.

Belafonte: Coco got a lot of iron, make you strong like a lion.

But selling coconut water in this country is a fairly new idea. Not one, but three brands are vying to break into the U.S. market. One drink is called Vita Coco. Another brand, Zico, has attracted investment from beverage giant Coca-Cola.

Rival Pepsi is jumping in with both feet. It recently bought the largest coconut water company in Brazil, and Pepsi Bottling has a U.S. distribution deal with a drink called O.N.E.

Rodrigo Veloso is CEO and founder of O.N.E. The letters O-N-E stand for One Natural Experience.

Veloso: Coconut water has everything an athlete is seeking. You have the hydration through the electrolytes and 660-milligrams of potassium, which is more potassium than a banana.

I asked John Sicher, editor and publisher of Beverage Digest, “Are Americans ready for coconut water?”

In terms of coconut water, so far, Sicher says:

Sicher: No one really has broken through yet.

Most of the coconut drinks sell for around $2 a piece.

Rodrigo Veloso says his drink isn’t just for athletes. It can also be marketed to party animals.

It’s the rehydration, he says, that staves off the hangover. If the idea catches on, you might soon hear people asking bartenders for their favorite alcohol mixed with: 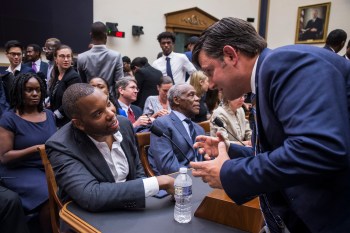