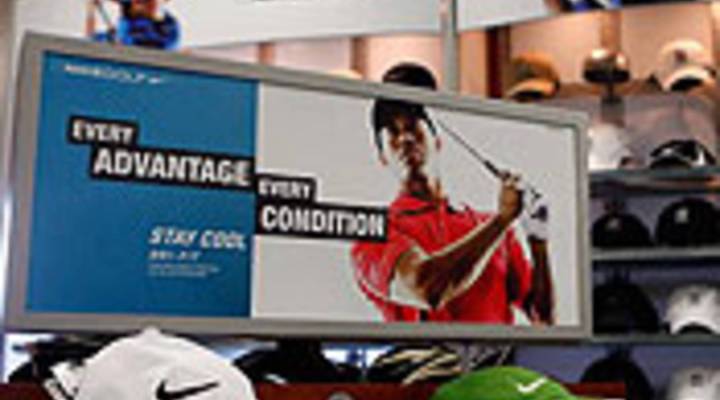 How will Tiger’s scandal impact brands?

How will Tiger’s scandal impact brands?

Kai Ryssdal: Well, the inevitable began to happen this weekend. Tiger Woods’s sponsors are dropping out. Accenture has officially cut its ties. A couple of others have pulled out entirely or put their marketing campaigns on hold. But Marketplace’s Stacey Vanek-Smith reports that most of them are holding on until he comes back.

STACEY VANEK-SMITH: Tiger Woods brings in about $90 million a year in sponsorship fees — or at least he did. Some companies, like Accenture and Gatorade, have dropped him. Others, like Gillette and AT&T, are reevaluating.

But media economist Jack Myers thinks most will stick with him.

JACK MYERS: There’s huge financial implications and marketers are not going to be quick to drop their support of him altogether.

But there might be some collateral damage. Tiger Woods has his image on so many products that when he gets mocked, so do they, like this Nike ad.

Marissa Gluck is with marketing firm Radar Research. She says for more conservative brands like Accenture, jokes like this are rough but for other brands, it’s not such a problem.

MARISSA GLUCK: I think for Nike, being mentioned on Craig Ferguson, being part of the popular culture keeps them top of mind and it, in a way, makes them maybe a little hipper because they’re part of the joke.

Gluck says as long as Tiger gets golfing again and wins tournaments, his brand recover. She points out basketball star Kobe Byrant and supermodel Kate Moss lost sponsorship deals over scandals, but their images recovered. And Gluck says marketers have invested heavily in Tiger Woods.

GLUCK: Tiger Woods is his own cottage industry. He is, he’s too big to fail.

Woods is worth an estimated billion dollars — more than any other sports figure in history.