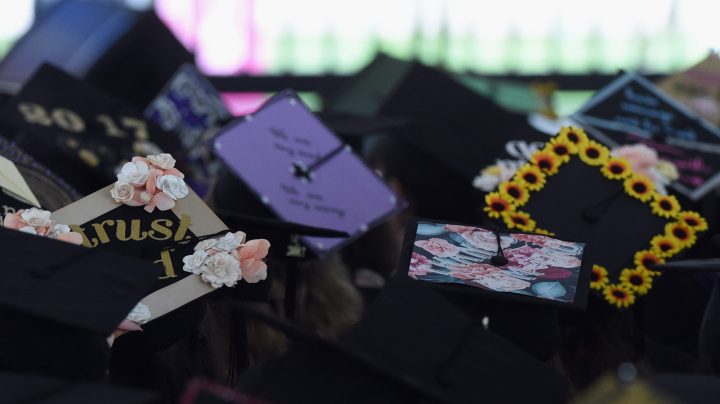 COPY
Degree inflation has made a college education almost mandatory. A hiring process based on skill could be more inclusive, and productive. Rick Diamond/Getty Images

Degree inflation has made a college education almost mandatory. A hiring process based on skill could be more inclusive, and productive. Rick Diamond/Getty Images
Listen Now

For decades, the gap between the economic fortunes of college-educated workers and the nearly two-thirds of American adults without a degree has been getting wider.

Partly, that reflects the transition of our economy from manufacturing to services, but it also reflects something referred to as “degree inflation” — the fact that an increasing number of well-paying jobs require college degrees, even ones that didn’t require them in decades past.

A pair of new research papers show just how many workers have been affected by this trend and what companies are doing to reverse it.

“It was like the doors of heaven just opened”

Atlanta-based Nadera Harris dreamed of becoming a filmmaker and, in 2013, began pursuing degrees in film and journalism at Hampton University in Virginia. “I just had this blueprint that I was going to go to school, get a degree, get the job,” she said.

A couple of years into her studies, however, financial difficulties forced her to leave the program.

“I was crushed,” said Harris. “I felt like everything I ever worked for was down the drain, because I wasn’t able to finish my bachelor’s degree program.”

That’s when she found Year Up — a nonprofit, tuition-free job training program that eventually led to an apprenticeship with multinational business services firm Accenture.

“It was like the doors of heaven just opened,” said Harris.

At Accenture, she got on-the-job training, working as a business analyst on a team developing an app. In 2019, she was hired full-time, and about a year ago, Harris was promoted to senior marketing analyst, a role with an average salary of more than $80,000, according to Glassdoor.

“In this one place we were able to learn the material, apply the material, and then get placed,” said Harris. “It just allowed me to get my second chance and show what I’m really made of.”

Too many people are missing out on these kinds of opportunities, said Papia Debroy, who leads research at the nonprofit Opportunity@Work.

“There are more than 70 million workers in our U.S. labor force today who are skilled through alternative routes — through community college, through military service. Most often they’re learning on the job,” Debroy said.

But these people — skilled through alternative routes, or STARs, as she calls them — have been increasingly excluded from upwardly mobile jobs. Key roles in fields like computer support, health care and sales used to be filled by a greater share of workers without college degrees. Over the last 20 years, the numbers have shrunk.

The biggest shift happened after the Great Recession, when high unemployment, even among college graduates, meant competition for all jobs was fierce. But even as the job market improved, degree requirements often persisted. Joseph B. Fuller at Harvard Business School put it down to one big reason: “The ubiquity of applicant tracking systems, [artificial intelligence], to winnow down a big pool of applicants into a smaller pool of candidates.”

With the advent of online hiring, companies often get hundreds of applications for each job and usually interview fewer than 10 candidates.

In the name of efficiency, Fuller said, employers use a college degree as a proxy to filter applications for the multitude of technical and “soft” social skills that have become increasingly important to jobs over the last decade.

As the job market has heated up, an increasing number of companies are moving away from this binary thinking, pledging to base hiring on skills rather than degrees.

Fuller’s research showed one of the companies that has made the most strides in this effort is Nadera Harris’s employer Accenture, where 46% of all jobs, from cybersecurity analysts to project managers, don’t require a college degree.

Jimmy Etheredge, CEO of Accenture North America, said employers need to think differently about how they look for talent.

“The assumption has always been, ‘I need to look for people that have a technical background, and then the easier thing to teach is the soft skills,'” he said.

Accenture has found people with customer service backgrounds often have great people skills. “It’s easier to teach them the technology, and they already have amazing skills for doing client-customer interaction,” Etheredge said.

To teach tech skills, Accenture has expanded its apprenticeship program from a small corporate responsibility initiative with about 10 participants five years ago, to a major pipeline of talent with hundreds of graduates a year. The company has pledged to hire 20% of entry-level jobs from the program this year.

Nadera Harris said she still wants to go back to school and earn that degree someday — when it makes sense for her.

Harris has a good job, one that calls on her passion for communication and offers her opportunities for growth. And she didn’t have to graduate college to get it.