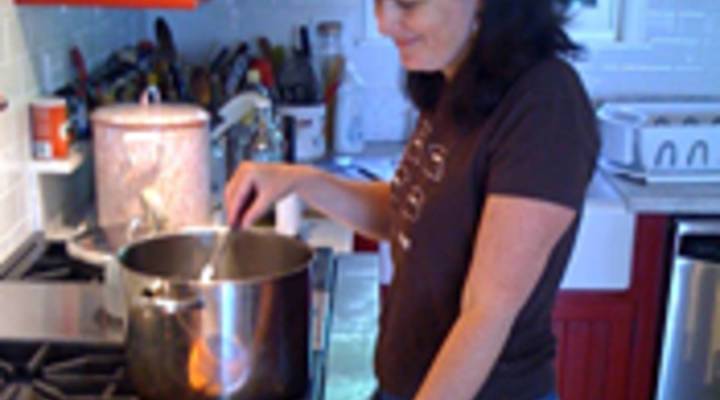 Where it pays to make it from scratch

Blogger Jennifer Reese boiling bagels in her kitchen. Reese explores the most cost-effective ways to make your own food in her blog, "The Tipsy Baker" Tess Vigeland

Where it pays to make it from scratch

Blogger Jennifer Reese boiling bagels in her kitchen. Reese explores the most cost-effective ways to make your own food in her blog, "The Tipsy Baker" Tess Vigeland

TESS VIGELAND: I’ve talked before about how frugal chic has taken hold of this nation. Seems you are a better person these days if you make your own clothes and cobble the soles of your own shoes. Well, we’re all about money and savings on this show, but we wondered just how much you actually save with DIY everything.

Jennifer Reese has done some of the math. The former book reviewer for Entertainment Weekly lost her job a few months ago. Now — she’s a blogger channeling Betty Crocker and trying to determine what that does to her bottom line.

I drove to Reese’s home, just north of the Golden Gate Bridge. The smell of yeast wafted through the air before I even reached the door.

Vigeland: Nice to meet you.

Reese: Nice to meet you too.

These days Reese is a backyard apiarist, who also raises chickens and makes all kinds of food and drink from scratch.

Reese: You want some water or a cup of tea or anything?

Vigeland: Well, do you have anything homemade?

Vigeland: No? No homemade root beer or whiskey or anything like that?

Reese: Um no. Oh actually I do…

She offered me some Cherry Bounce, a concoction of cherries and bourbon that’s been stewing in the pantry for months. Perhaps this is why she calls herself the “Tipsy Baker”? We chose to stick with water for the afternoon refreshment. And Reese got started punching holes in blobs of dough on the kitchen counter.

Reese: Look at these, these are big gnarly bagels. They’re sort of beautiful in their rough way.

As she plopped them into boiling water, Reese noted that when she started doing all this happy homemaker stuff, she wasn’t sure about its cost effectiveness. So she checked what a single bagel from the grocery would cost: 45 cents. At the national bagel chain Noah’s?
75 cents. Here in Tipsy Baker-land? A winning 15 cents a bagel. But not every frugal food effort is paying off so promptly.

We headed out back to what we’ll call “Reese’s urban livestock center.”

Reese: Hey girls, where are you? Come here. Let’s see we have 12 chickens, they were about $3 each to buy. And they have been incredibly cheap.

Vigeland: And what have they given to you?

Reese: Nothing yet. But they are going to start producing eggs, I’m sure, like 60 eggs a week I’m hoping. The cost effect is, we’re going to about break even in terms of how much I’ve spent on the chickens, if they produce anything like they’re supposed to produce. But we’re going to have so many more eggs than we need that if we could actually sell them, we could make a profit.

So far the chickens cost about $175. We walked through her new veggie and fruit garden and back upstairs to the kitchen. The now baked-and-browned bagels came out of a hot oven.

Reese: See, you would never mistake these for a store-bought bagel.

Vigeland: No, I wouldn’t, but I kind of like that.

Reese: Most of them don’t even have a hole.

Vigeland: Now do you have any homemade cream cheese to go with these?

Reese: I made cream cheese and that was not a success. It was kind of very loose creamy and it just was not something that anybody wanted to eat.

Vigeland: And it didn’t come in a block surrounded by foil.

So no more homemade cream cheese. I wondered what else she’d attempted where the cost-benefit analysis didn’t work in her favor.

Reese: I made butter. That was really stupid. It costs more to make butter by whipping your cream than it does to buy butter. Does not make sense unless you have a cow.

Jam, however, is cost-competitive. Crackers are not. Granola isn’t either, but she says it tastes so much better that it’s worth the extra cost of making your own. There was, however, one bit of frugal fooding for which Reese may never recoup her investment.

We walked out to a small deck with two three-foot tall apiaries. I asked what had prompted her to become a suburban San Francisco beekeeper.

Reese: Well… I don’t know. I had always thought of doing all these things. And I lost my job in December. And suddenly I had a lot of time and I started thinking about my little piece of land and what I could do.

And naturally that led her to a beekeeping seminar.

Vigeland: Really? What was your initial investment?

Reese: I had spent a thousand dollars.

Reese: Two beehives with the bees and the books and the smokers. And I was not extravagant.

Vigeland: Alright, then let’s ask what you’ve gotten for your investment?

Reese: Nothing yet. Conceivably, if these hives produce what beehives can produce, average, in the San Francisco Bay area, you could get about $350 a year. But I would have to sell the honey and bottle it.

Vigeland: And are you planning to do that?

Reese: But who knows.

But really, she said as we returned to the kitchen, efforts like these can’t just be about pinching pennies. Reese says when she first started tabulating her costs:

Reese: I assumed that it was ridiculous. That of course it was going to be cheaper to buy your own yogurt. I thought everything everyone did in a factory was going to be cheaper and it was sort of this fake economy around being crunchy and homespun. But it actually turns out to be almost true that you can save money by doing things at home.

Reese: I don’t know if I think it’s about that. The chicken coops and the bees are about frugality. I think that if you say that you’re doing it to be frugal, that’s probably not rational.

And with that it was finally time to partake of the Tipsy Baker’s bagels.

Vigeland: They’re tasty. And they actually have a little more crunch on the outside than normal bagels do and I like that. So how often do you make these?

Reese: I’ve made these maybe six or seven times. My kids love them. The first batch I made they ate them in like an hour.

Vigeland: Alright, well we’re going to put up this recipe on our Web site and invite folks to make bagels right along with you and how that process goes. Jennifer, thanks so much for inviting me into your home and feeding me.

Vigeland: That was Jennifer Reese, also known as the Tipsy Baker.