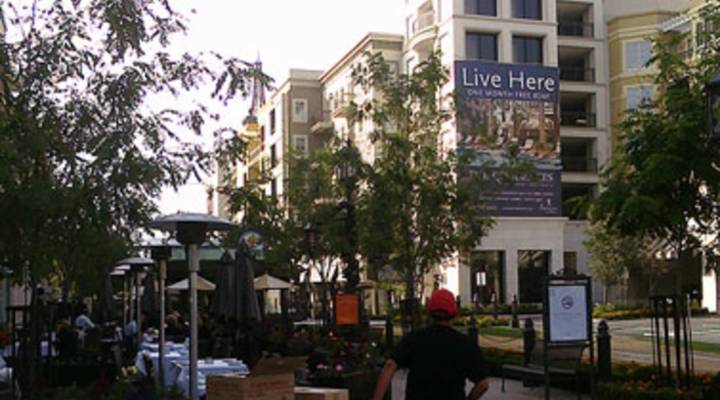 COPY
A view of the Americana in Glendale, Calif. Stacey Vanek-Smith / Marketplace

A view of the Americana in Glendale, Calif. Stacey Vanek-Smith / Marketplace
Listen Now

Steve Chiotakis: Before the economy took a detour south, Americans were doing two things at a record-setting pace: shopping and buying houses. So then maybe it’s not too surprising that somebody came up with the bright idea to combine the two. Mallpartments are malls with apartments in them. And they were supposed to be the next big thing. Marketplace’s Stacey Vanek-Smith tells us how that’s working out.

Stacey Vanek-Smith: The Americana mall in Glendale, Calif., was designed to look like Main Street. You know, where people used to shop before there were malls. There’s a paved street, a trolley, a big lawn with a fountain. There are restaurants and shops, like Forever 21 and Tiffany. And above them, hundreds of apartments and condos. Welcome to the mall of the future… or, what was supposed to be the future.

Suzanne Mulvee is a real-estate strategist with PPR.

Suzanne Mulvee: The ability to unlock some of the value that sits on that real estate, enticed these developers to come up with alternative ways to get more value out of the same property.

Mallpartments went up in Massachusetts, Washington D.C. and Arizona. Then the real-estate market collapsed. Apartments above one Boston mall went into foreclosure. The Americana’s done well with rentals, but half of the condos — which sell for between half a million and $2 million — are unsold.

SPENCE MEHL: Those areas have grown organically over a 100-year period. To just throw ’em up like Disneyland, people have trouble with that.

PAUL Dergarabedian: I never want to leave. It’s that great. Nobody paid me to say that by the way.

Paul Dergarabedian moved into the Americana a year ago.

Dergarabedian: You’re living in a mall and people laugh when you say that, but it’s a way of life that I love. I have like five or six restaurants right here, I can do shopping for clothes. Whatever I want to do. Then, they have events all the time, like they’re putting up the big Christmas tree here, it’s right outside my window. They have a Santa’s village. There’s the hustle and bustle, I never feel alone. There’s always people around.

The Americana offers concierge service, yoga classes on the lawn, a farmer’s market every Saturday.

Mulvee: I believe in the mixed-use concept. I just don’t know that I want to live at the mall.

At the Americana, I’m Stacey Vanek-Smith for Marketplace.