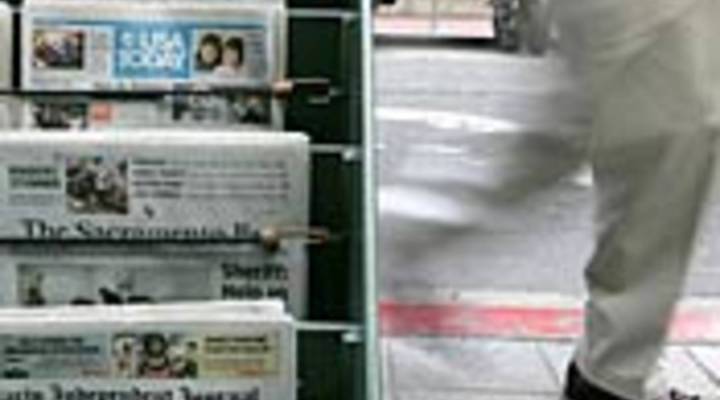 Kai Ryssdal: As fewer people read newspapers, fewer newspapers can afford the wire services, like the Associated Press. The Tribune Company said today it wants a trial separation from the AP. Next week it’s going to experiment with not using AP stories and pictures in its papers, including the Chicago Tribune and the Los Angeles Times. Marketplace’s Stacey Vanek-Smith has more on the changing economics of journalism.

STACEY VANEK-SMITH: The bankrupt Tribune Company spends millions of dollars a year on its subscription to the Associated Press. Next week, it’s going to test drive some less expensive services, like Reuters, Bloomberg and The New York Times.

Gerry Kern is vice president of editorial for Tribune Publishing.

GERRY KERN: What we’re trying to learn here is, if we can essentially unbundle wire services and buy only what we need.

KEN DOCTOR: The AP has been like a utility. It’s kind of like running water for newspapers. It fills in big and little gaps in their coverage.

But now, Doctor says papers are focusing more on local news and don’t need the AP’s vast offerings of international and national stories. Readers get so much of that from TV and the Internet. Earlier this year, the AP slashed prices to try to hold on to subscribers.

JEFF JARVIS: The fundamentals of the media economy are changing, from a content economy to a link-based economy.

Jarvis says the AP needs to become the broker for those links, like helping the Baltimore Sun link to a story about GM from the Detroit Free Press. Or providing links to news about the Tribune Company’s AP-free week … maybe not.