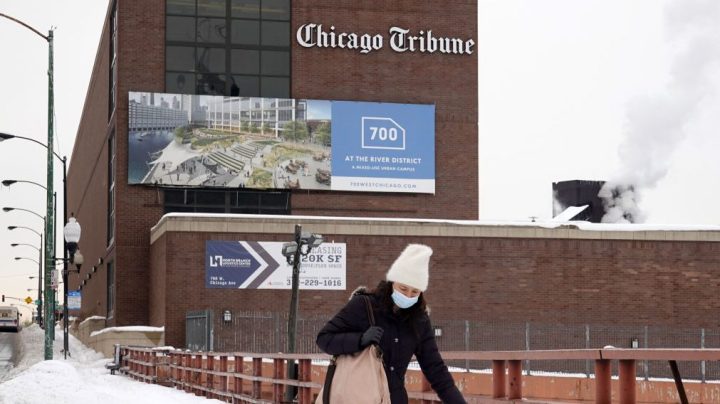 COPY
The Chicago Tribune's downsized headquarters at the Freedom Center printing facility. Across the U.S., newsroom staffing was estimated at 30,820 in 2020, a 56% decline from 2004. Scott Olson via Getty Images
Shelf Life

The Chicago Tribune's downsized headquarters at the Freedom Center printing facility. Across the U.S., newsroom staffing was estimated at 30,820 in 2020, a 56% decline from 2004. Scott Olson via Getty Images
Listen Now

While the pandemic has been difficult for the news industry, traditional papers have seen revenue and staffing declines over the last decade. According to the Pew Research Center, newspaper ad revenue in 2020 was estimated at $8.8 billion, a 29% decrease from 2019 — and an 82% decrease from 2000, when it was $48 billion. Analyzing data from the Bureau of Labor Statistics, Pew calculated that newsroom staffing was 30,820 in 2020, a 56% decrease from 2004.

As money gets tighter in the news industry, there are many communities that professional journalists aren’t writing about. “There have just been places across the U.S. that have never really been seen to be viable news markets,” Nikki Usher, media professor at the University of Illinois at Urbana-Champaign, said in an interview with Marketplace’s Kimberly Adams. “That doesn’t mean that those communities don’t have news, but the kind of news that we tend to think of as professional news and information just hasn’t existed in these places, or these places have been tremendously under-resourced.”

In her book “News for the Rich, White, and Blue: How Place and Power Distort American Journalism,” Usher looks at how the issues in the news business affect who’s able to make the news and how they make it. To hear Usher’s radio interview, use the media player above. In the excerpt below from the book’s second chapter, Usher describes how revenue loss for one major metropolitan paper, the Chicago Tribune, resulted in the actual displacement of the paper’s headquarters.

The Chicago Tribune’s Tribune Tower was built as a cathedral for journalism. In 1922, Col. Robert R. McCormick held an international architecture competition with a $100,000 prize to solicit plans for “the most beautiful and distinctive office building in the world.” Today, the 236 entries from twenty-three countries are still instructive for a time when classical architecture, art nouveau, and the then-futuristic art deco were battling for supremacy. McCormick chose to go classical (or neo-Gothic). The outside of the Tribune Tower, with flying buttresses and gargoyles, resembles Notre Dame and boasts 149 stones from landmarks around the world, including the Great Wall of China, the great pyramid at Giza, the Parthenon and the Taj Mahal. It is meant to represent the Tribune’s domain — the world. McCormick had dubbed the Tribune the “World’s Greatest Newspaper,” a tagline that ran into the modern era on the banner of the print newspaper and still serves as the call letters for what were once Tribune-owned radio and broadcast stations.

The foyer brings to mind Westminster Abbey, replete with marble floors, vaulted ceilings, stained-glass windows, and a John Ruskin quote etched into the floor, along with lines from the likes of Samuel Johnson, James Madison, Thomas Jefferson and Daniel Webster about the importance of journalism to society carved into the cement walls. Dark brown wood the color of church pews adorns the wall behind the security desk, which is flanked by a map of North America with three-dimensional topography said to be made of plaster and U.S. currency; above the map is a stunning clock with Roman numerals featuring a bas-relief of crests, small figures and interlocking ivy. Behind the security barriers are ornate elevators, once rumored to separate the advertising and business floors from the editorial and production floors of the newspaper, so that business commitments would not interfere with editorial judgment. As the Tribune’s Pulitzer Prize-winning architecture critic Blair Kamin put it in the tour he gave me, “You are entering the cathedral of a free press, the presbytery of Midwest conservatism.”

But in 2018, Tribune employees were forced to pack up and move from these headquarters on Chicago’s Magnificent Mile to a few floors in the Prudential Building, named for the insurance company. The newspaper’s parent company, Tronc (renamed to signal a digital future), had sold the building as a cost-cutting measure. The Tribune was facing a host of challenges common to other Goldilocks newspapers, but it also had suffered from some uniquely dysfunctional mismanagement over the past half-decade. Following the Chicago businessman Sam Zell’s purchase of the company, there was a subsequent bankruptcy, a sexual-harassment scandal in the c-suite, and excessive executive compensation that funded private jets and premiere sports tickets but also resulted in cuts to newsroom jobs.

In March 2018, I visited the headquarters just before the move. By Kamin’s desk were at least four completely empty cubicles; around the newsroom were other empty cubes, but in many cases, their former inhabitants had not bothered to dispose of the detritus of papers and files amassed over the course of a journalism career. The space was dark, with poor overhead lighting. Though it was a day after daylight saving had “sprung forward,” the digital clocks around the newsroom were still an hour behind. For an industry consumed with timeliness, not to mention being first to break news, the neglected clocks seemed to me a particularly noteworthy sign of the state of disrepair. Later that day, Kamin took me up to a hidden balcony, where journalists could peer out beyond the gargoyles, the sentinels over their city, empowered from thirty-four stories above, and see dot-sized people walking below. Now these journalists were being kicked out of their cathedral.

Even though newspapers may be losing power, perhaps paradoxically, this institutional decline actually reifies the separation between journalists and the people they cover. Newsrooms remain places of power, even as journalists are losing their authority over places, including their own physical workplaces. Those who have access and entry into the newsroom get to mold the coverage we see; those who pay for news will increasingly determine where journalists direct their scarce resources. And as journalism jobs become increasingly precarious, newsrooms become bastions of privilege, making any meaningful gains in diversity and inclusion more difficult to maintain or advance. As newspapers enter market failure, current market logics for news stand to worsen existing inequities in what people and what places are covered.

Excerpted from “News for the Rich, White, and Blue: How Place and Power Distort American Journalism” Copyright (c) 2021 Columbia University Press. Used by arrangement with the publisher. All rights reserved.