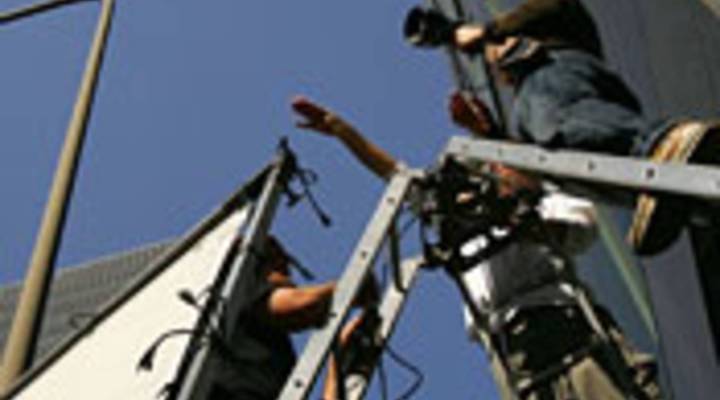 Kai Ryssdal: The lights and cameras might be here in Los Angeles, but increasingly the action is elsewhere. Foreign countries and other U.S. cities and states have been luring filmmakers away with tax breaks and other incentives for years. Now Los Angeles is mad as heck and not going to take it anymore. Marketplace’s Stacey Vanek-Smith reports.

Jason Squire is with the USC film school. He says these incentives are long overdue.

JASON SQUIRE: For years, the city of Los Angeles has not been implementing this, believing that because it is the center of entertainment, that it wasn’t necessary and it wasn’t really a serious enough issue.

The number of films shot in California has dropped dramatically since 2003, costing the city jobs and revenue. During that time, more than 40 states were offering tax breaks and other perks to lure filmmakers. But as California is stepping up its incentives, a lot of those states have started scaling back.

HAL VOGEL: For most of these states it’s really a waste of money. It actually ends up costing the taxpayers of the state a lot more than they think.

Entertainment industry analyst Hal Vogel says states thought the tax breaks would pay off in jobs and extra revenue. But the investment in infrastructure outweighed the money the films brought in. Michigan for instance, spent more than $30 million last year in tax incentives to film companies. Now the state is looking at a big budget shortfall and needs all the tax dollars it can get.

VOGEL: I mean there’s a reason why L.A. didn’t start making cars. Because the expertise to make cars is in Detroit but that’s not the expertise of necessarily Detroit making movies.

Vogel says incentives do make sense in places like Los Angeles and New York, which have the infrastructure already in place.