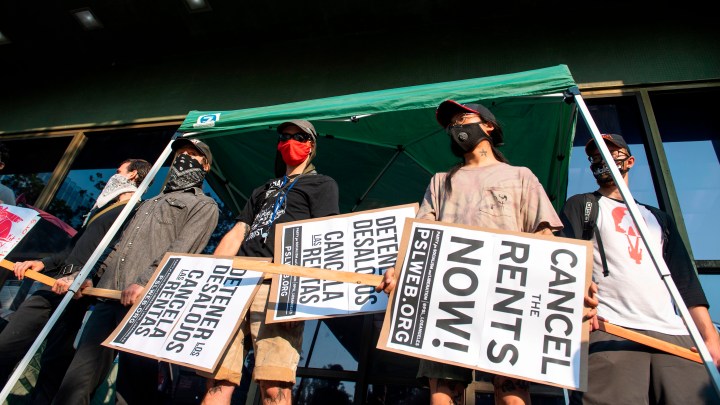 President Joe Biden recently extended eviction protections for most renters in the country to Oct. 3. But time is still ticking for states and local governments to distribute rent relief money to tenants who’ve fallen in debt to their landlords.

According to the Treasury Department’s latest numbers, less than 7% of the $45 billion Congress passed for rent relief has actually been paid out nationally. Hard-hit cities like Los Angeles aren’t doing much better at getting money out quickly.

Kelli Lloyd, a single mom raising two kids in the Baldwin Hills neighborhood of L.A., stopped receiving child support payments early on in the pandemic. By May of last year, she could no longer afford her rent.

“It has been a scary time,” Lloyd said. “We have, as a family, depended on the extensions and the moratoriums.”

Lloyd breathed a sigh of relief when Governor Gavin Newsom extended the state’s eviction moratorium to Sept. 30 earlier this summer. Now, she is counting on the city to help clear her rent debt before the protections expire. Lloyd applied for the city’s rent relief program shortly after it launched in March.

“It’s been quite a relief to know that there is help available,” Lloyd said.

For months, she’s been checking to see if her application will be approved. But so far, the city has only reached out to ask her for more identification. Aside from that, Lloyd said, “I haven’t heard anything yet.”

More than 100,000 people applied to the city’s rent relief program, most of them in the same boat as Lloyd. By early August, the city had only distributed about 15% of its current rent relief funding.

Landlords are also frustrated with the delays from L.A.’s housing department.

“Every time we call in, we get the same answer: ‘We don’t have enough resources. We’re doing the best that we can. Be patient,’” said Ari Chazanas, the president of Lotus Properties. “This has been going on for months.”

Chazanas said about 35 of his tenants have fallen behind on rent. Most of them have applied for the city’s rent relief program, and he said his company has submitted all the paperwork requested by the city. “Some of these instances of tenants applying go back several months without one penny being delivered to either us or the tenant,” Chazanas said.

The local need is staggering. A recent UCLA survey found that 49% of renters in L.A. owed some amount of money to their landlord. Add it all up, and the researchers estimate L.A. County’s total rent debt to be more than $3 billion.

Leona Rollins with the nonprofit Housing Rights Center, who helps the city process applications, said tenants are worried about getting evicted and becoming homeless.

“Some of them are so distraught,” Rollins said. “They’re crying. They’re like, you know, ‘I’m getting notices every month. I just don’t have the money.’ We don’t want them to have that concern anymore.”

So, why the delays? The city often needs time to follow up with applicants. There can be a lot of back and forth, such as asking tenants about their loss of income — or asking them to verify how far they’ve fallen behind on rent.

Rollins said: “We want to make sure that we give everybody ample opportunity to submit whatever documents they need to make their application whole, so that they could be deemed eligible and we can then coordinate with their housing provider to get that money disbursed.”

Governor Newsom and state lawmakers have been telling people worried about eviction to apply for rent relief right away. But in L.A., renters can’t do that. The city closed its program in April, and it’s unclear when it might start taking new applications.