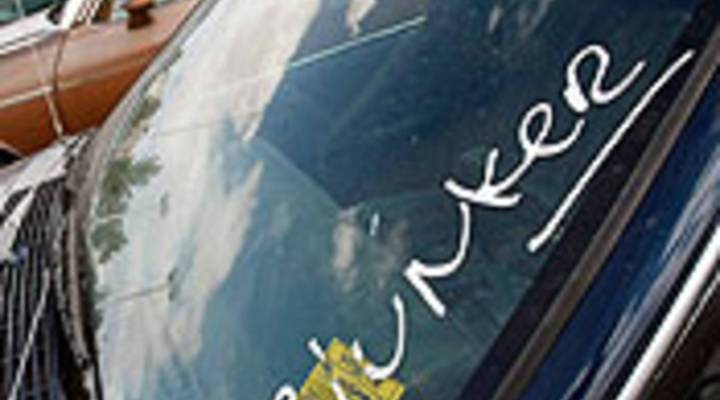 COPY
Cars traded in as part of the Cash for Clunkers program are parked at the Team Ford dealership in Las Vegas, Nev. Ethan Miller/Getty Images

Cars traded in as part of the Cash for Clunkers program are parked at the Team Ford dealership in Las Vegas, Nev. Ethan Miller/Getty Images
Listen Now

Bill Radke: Cash for Clunkers rolls on today. The Senate joined the House last night in voting to refill the program with 2 billion more dollars. President Obama will sign that bill, extending the program into Labor Day.

Cash for Clunkers, of course, pays car buyers to trade in the gas guzzler for a new, more efficient vehicle. New car dealerships adore the program, but Marketplace’s Stacey Vanek Smith says the love is not universal.

Stacey Vanek-Smith: Cash for Clunkers has sent hundreds of thousands of cars to the scrap heap. And while that’s good for new car sales, it’s not so good for used car dealers. Trent Snyder is the manager of Trent’s Used Car Network in Princeton Minnesota. He says Cash for Clunkers has created a shortage of used cars, and pushed prices up.

TRENT SNYDER: It’s driven car prices through the roof because there’s less supply out there for them to sell, and there still is a strong demand, and there’s still a dire need for that lower-priced car.

Snyder says, many would-be used-car buyers can’t afford one now, so those sales are lost. But the shortage of inexpensive used cars will help some sellers get more for the junker they’ve got. Paul Taylor, chief economist at the National Automobile Dealers’ Association.

PAUL TAYLOR: But it does make used cars more valuable, and that’s important to the customers that they have more trade-in equity on a new car or on an additional used car.

More than 250,000 people have cashed in on their clunkers so far.