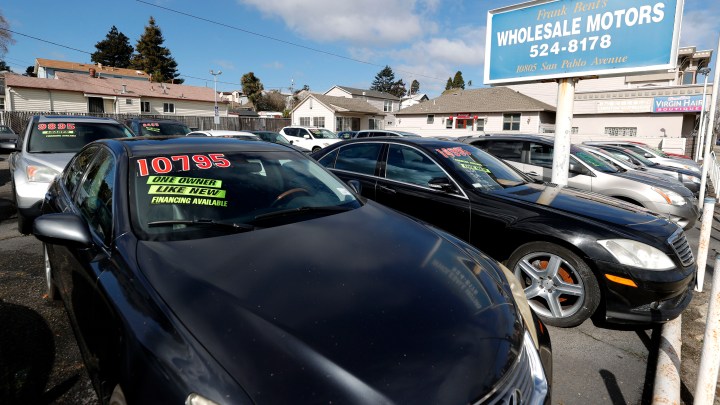 COPY
The average vehicle on the road in the U.S. is now about 12.1 years old, new data shows. Justin Sullivan via Getty Images
Cars

The average vehicle on the road in the U.S. is now about 12.1 years old, new data shows. Justin Sullivan via Getty Images
Listen Now

The average age of cars and light trucks in the United States rose during the pandemic by about two months. The average vehicle is now 12.1 years old, according to IHS Markit.

But this doesn’t necessarily mean people are hanging onto their clunkers longer or even that they want to hang on to them longer.

In general, we are driving cars for longer, and the average car has been getting older for a while now.

“If you go back and look at the data, it’s up about 36% over the last 20 years,” said Kelsey Mays, assistant managing editor at Cars.com.

Cars have become safer and more durable over the years. But that’s not really why the average car age jumped specifically during the pandemic.

David Whiston, an equity analyst with Morningstar, said for starters, buying a new car wasn’t top of mind then. Even if people wanted to, they couldn’t because of lockdowns.

So having fewer new cars helped push up the average age of all cars a little. A lot of cars were also taken off the road and out of commission because people just stopped using them — even younger, newer cars, according to IHS Markit’s Todd Campau.

“Vehicle owners may have allowed their registrations to lapse because they weren’t using their vehicles. They decided they were going to keep them in the garage and not renew the tags on the vehicle,” Campau said.

This phenomenon was skewed to younger vehicles, and that shows up in the data as a bunch of young cars disappearing from the numbers. That pushes up the average age of all cars.

Chances are, those cars will get reregistered, and demand for new cars has built up.

“March 2021 was a record-setting month for new and used sales, and then April followed up with a top-10 month for new sales, and so we think all that’s going to combine to keep average age back on the moderate path,” Campau said.

As of last month, used car prices were up nearly 17% since January of 2020. So it’s a good time to trade in a used car. Or, of course, donate it to public radio.