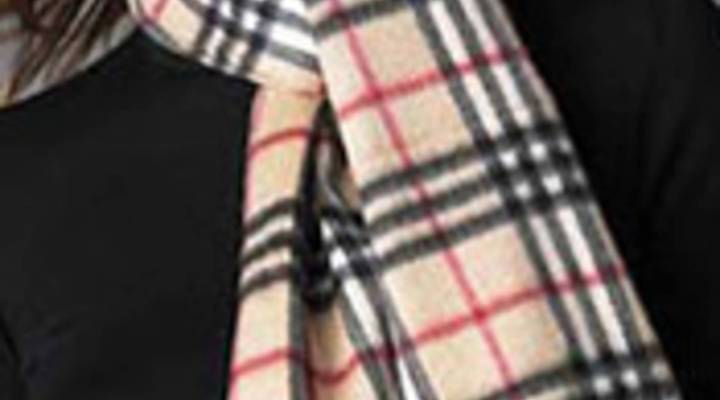 COPY
A scarf of trademark Burberry plaid. Burberry's iconic check was first used in 1924 as a lining for Burberry-brand trenchcoats. It wasn't until the late 60's that the pattern became more widely used on everything from scarves to umbrellas. burberryscarfmart.com

A scarf of trademark Burberry plaid. Burberry's iconic check was first used in 1924 as a lining for Burberry-brand trenchcoats. It wasn't until the late 60's that the pattern became more widely used on everything from scarves to umbrellas. burberryscarfmart.com
Listen Now

Kai Ryssdal: We’re just on the leading edge of back to you-know-what season. Retailers are trying everything they can to pry the money out of consumers’ hands before school starts. With the economy the way it is, they’ve basically got two choices. Mark-downs and must-haves. Retailers like that second one, of course, because they can still make a little money there. So this season they’re pinning their hopes on a very familiar pattern. Marketplace’s Stacey Vanek Smith reports.

STACEY VANEK-SMITH: After more than a year of being pounded by the recession, retailers think they’ve finally found the strategy for success…plaid.

Karolyn Wangstad is Vice President of trend for JCPenney. She says plaid is a pillar for the fall. She says it works for men and women, and you can put it on anything.

WANGSTAD: An assortment of tops, jackets, outer-wear, handbags, scarves, hats. You name it. We call it total plaidness around here. That’s kind of our joke.

But this season, plaid is serious business. Adrienne Tennant is an apparel analyst with FBR Capital Markets. She says retailers are banking on plaid becoming a must have.

ADRIENNE TENNANT: It’s very important to have something that will drive and generate that full-price sale. Because now we really have to get her off of bargain hunting.

Families are expected to spend about 8 percent less on back to school shopping than they did last year. Plaid fits into that pattern, too, says Wendy Liebmann CEO of WSL Strategic Retail. She says you can put the print on any fabric, from cashmere to cotton, so even cash-strapped shoppers can get their plaid on.

WENDY LIEBMANN: This sense of trying to make even the trend merchandise affordable has been really a mantra for most of the retailers around the country.

And some of us may not even have to buy anything, if we can just find those old flannel shirts, which are probably somewhere in the garage with our Nirvana posters, Doc Martens and fingerless gloves.