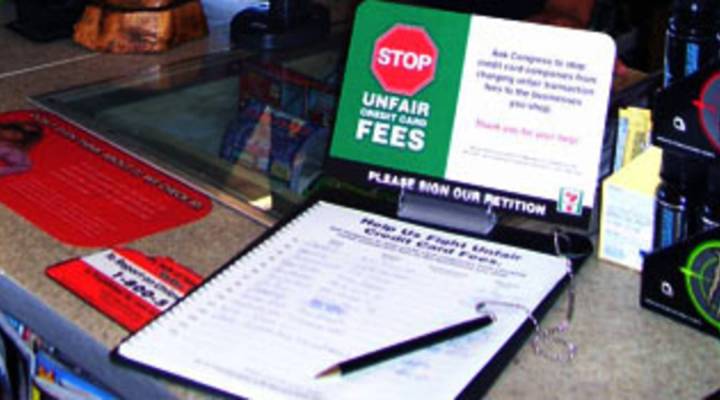 Bob Moon: If you’ve dropped by your local 7-Eleven lately, you might have noticed something. Past the glossy gossip rags and energy shots, a petition. The convenience chain is protesting the fees the credit card companies charge
every time we use plastic. Small business owners across the country say those hidden charges are talking a big gulp of their profits.

I have cash somewhere in the greater depths of my purse. But it’s easier to just swipe my card. I don’t even have to sign.

Actually, it’s Visa that should be thanking me. 7-Eleven just had to pay them about 11 cents so I could charge my Slurpee.

It’s called an interchange fee and it works like this: Every time I use my Visa card, the merchant who takes it, pays the credit card company a flat fee, usually about a dime. The card company also gets about 2 percent of the purchase price. So, for that $1.53 Slurpee, 7-Eleven paid Visa 11 cents, that’s almost 10 percent of the price. Gunu Singh owns the 7-Eleven.

Gunu Singh: This store alone pays over $28,000 in credit card fees. And for us, that would translate into hiring another person from the community.

Jeff Lenard is with the National Association of Convenience Stores. He says those fees totaled $48 billion last year.

Interchange fees have tripled since 2002. And retailers, who have already been hammered by the recession, are now seeing interchange fees eating in to what little profits the have left, says Mallory Duncan, with the National Retail Federation.

Mallory Duncan: After you take out the cost of merchandise, rent, employees, benefits and all the other costs that go into running a retail store, the typical profit margin is 2 percent. That means most retailers only take home $2 on $100 of sales. Now, the card companies are asking for that same $2.

In his 7-Eleven in Santa Clara, Calif., franchisee Long Nuygen has already gotten about a thousand customers to sign his petition protesting interchange fees. He says it’s easy to make his case, once customers realize they have something at stake.

Long Nuygen: “Is it really going to affect me?” That’s their main question. And I’m like, look, it does, at some point, I have to pass on the goods. Now your milk costs more, because I have to make these margins somewhere.

But these merchants are leaving something out of the equation, says Peter Garrucio, spokesman for American Bankers Association, which represents credit card issuers.

Peter Garrucio: The key to remember or realize is the enormous benefit that merchants get from accepting plastic.

Garrucio points out that taking cards brings business to retailers and the banks that issue the cards take on the risk of the purchase. So if I don’t pay my Visa bill, 7-Eleven still gets the money for my Slurpee.

There’s legislation in the works that might let 7-Eleven keep more of that money. Congress is looking in to interchange fees and the Senate has introduced anti-trust legislation aimed at credit cards.

Justin Rose: I hate those credit card fees. They jack up the prices on food and drinks and chips and everything else in the store.

Comments from merchants in our Public Insight Network:

We no longer take American Express. We tried it for a while because we had one customer that said in order to do business with his numerous stores (we’re wholesalers) we had to take American Express. The fees were astounding. The customer didn’t do the volume he’d promised, and we cancelled. No one else was surprised. Few of our customers (retail stores) take it.

I had a short, very unfortunate stint with US Bank Card. The sales rep was an acquaintance of mine and he gave me the rate, the cancellation policy and the fees, all in writing and all incorrect. Although the rate I was promised was 1.99%, what I actually got charged was more than double that. Then there were monthly charges and “gateway” fees. I was told I was in a three-year contract (I didn’t know that) and could not cancel the account. These all came directly out of my checking account, there was no option not to pay it. Complaining to the customer service reps was hopeless. Wait times were 20 minutes and up. When I asked for the supervisor’s name, they could only give a first name. I had to complain to the Better Business Bureau in their city before the account was cancelled.

For Visa and Mastercard we are charged:

The cost of accepting Visa and Mastercard keeps going up as more and more of the cards in circulation are rewards cards.

For a few days we stopped accepting Amex. We measured the sales loss, which was not significant, but we had to deal with so many questions from customers that it wasn’t worth our time. Also, the reduction in American Express volume was offset by an increase in Visa/Mastercard rewards and business cards, which are much more expensive than average. Most people don’t know that there is a wide range in the cost of Visa/Mastercard cards depending on the actual card…. The monetary savings were not worthwhile, so we started accepting Amex again.

I only accept Mastercard and Visa because American Express charges me almost 4% processing fees (vs. 1.9% for Mastercard or Visa). I’ve lost a few customers because of it, because there is so much incentive to people to use their Amex — but it’s on the back of the processor!

I pay more in credit-card fees than I take home from working 24/7 in my gas station. It is the single-largest expense after payroll. Now electricity is catching up.

The biggest issue is customers are hurting and cannot afford to go up on prices. The second biggest issue is with chain gas stations (Pantry, etc) that seem to be built on a business model of going bankrupt every seven years. Small biz is a living hell. Credit card fees are horrid and we cannot do a darn thing about it.

A large proportion of my meager retirement savings is in credit-card stocks…. If you cannot beat them, might as well join them — right?

The fee schedule is complicated(!) and varies greatly depending on the card used, whether it’s a rewards card, the method used to accept the charge, etc. We haven’t refused to accept cards on the basis of fees so far, because what else can we do? They’ve got us where they want us. If we want our customers to pay us, we HAVE to accept their credit cards.

Have you had similar experiences with credit card companies?