Vendors try to cash in at MJ memorial

Vendors try to cash in at MJ memorial

Kai Ryssdal: It’s about 10 blocks from our studios to the Michael Jackson memorial down at the Staples Center here in Los Angeles.

Ten blocks to what you might call a completely saturated market.

About halfway down to the memorial service we run into our first T-shirt vendor. Tony Parker’s got his merchandise stacked high on a folding card table.

You’ve got your choice of poses, young Michael all the way to the superstar with the white glove and the fedora.

RYSSDAL: Listen how much for the shirt?

VENDOR: Ten dollars for the shirt.

RYSSDAL: See now that’s funny, I can get one up the street for $5.

VENDOR: Most of the ones that are out here, they all look the same. Mine are little bit different.

RYSSDAL: Do you feel bad at all that you’re making money off Michael Jackson?

VENDOR: I don’t feel bad at all because I supported him and bought his albums, and I’m pretty sure that something like this would continue his legacy, you know. People wear this shirt, it’s representing him.

We’re standing on Figueroa, between 9th and the Staples Center, which is about a block away. You can’t move without hitting somebody who’s trying to sell you something, whether it’s a Michael Jackson memorial book or a t-shirt. There are food vendors here. There are ice cream sellers, although he said business wasn’t really so good. You’ve got potato chips and water walking by.

RYSSDAL: You selling a lot of that, by the way?

VENDOR: Nah, nothing, nothing. They’re making me drink beer now.

VENDOR: A bottle of water, and that’s about it.

Some of these folks selling t-shirts say they hope to clear a couple of hundred dollars today. But Jonathan Hall’s aspirations aren’t quite so high. Right in the thick of the action he’s leaning on a railing offering t-shirts with a picture of Michael lifted from that Shephard Fairey image of Barack Obama during the campaign. The red and blue one with the profile in white.

RYSSDAL: This is off that Obama poster, right? This Michael Jackson thing.

JONATHAN HALL: Yeah, that’s what the guy told me.

HALL: Some guy, I don’t know. I just see him on the street, and he said I’ve got these shirts, and I was like, hey OK.

RYSSDAL: So how much you figure you’re going to make?

RYSSDAL: Is that a good deal?

HALL: I don’t know. I just need to pay the bills, so I’m doing whatever it takes, right now.

RYSSDAL: Do you have a regular job?

RYSSDAL: So this is pretty good.

VENDOR: Yes. I gotta do what I gotta do, you know? Tough times.

Just a block from the Michael Jackson memorial, it was all about getting by today. And there was no joy on Wall Street either. 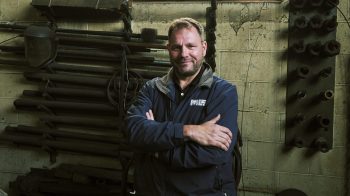