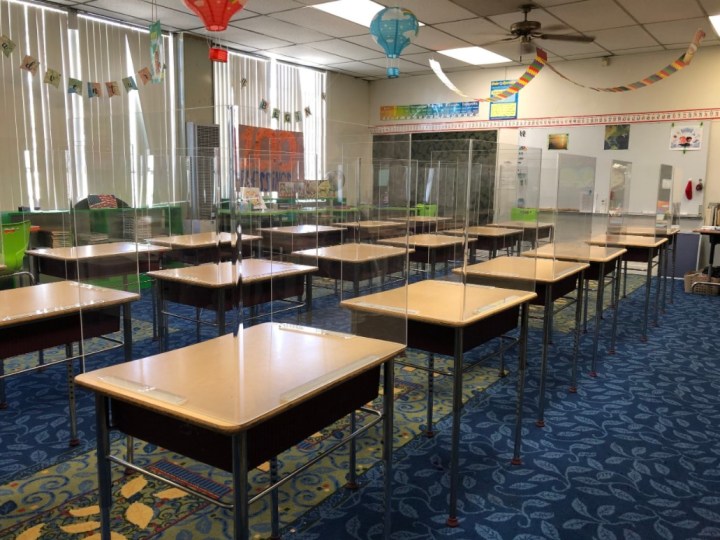 The highs and lows of making in-demand pandemic products

The highs and lows of making in-demand pandemic products

Like face masks and those 6-foot markers on grocery store floors, plastic barriers separating essential workers from their customers have become a symbol of this pandemic economy.

As demand for those products skyrocketed last year, California Acrylic Design, a small custom acrylic manufacturer in Los Angeles, initially saw a surge in business. But, co-owner Michael Sperr said, the firm experienced highs and lows as the pandemic dragged on.

The following is an edited transcript of Sperr’s conversation with “Marketplace” host Kai Ryssdal.

Kai Ryssdal: So back in the Before Times, say, like last February-ish, what kind of stuff were you making?

Ryssdal: And then the bottom falls out in March-ish, and what happens to your order book?

Sperr: Well, we get the stay-at-home order, we didn’t even know if we were allowed to be open after that, so you know, we cut our production to three days a week. But wow, within 10 days, the barrage of emails, the phone’s ringing. People needed those screens for counters and desks.

Ryssdal: Yeah, I imagine there was some desperation.

Sperr: There was. Of course, they were always in a hurry, and we have four employees, up to five at the most, and we were just cranking it out as fast as we could.

Ryssdal: Do I have it right that you got a contract from the [Transportation Security Administration at Los Angeles International Airport]? I mean, that’s not a small customer.

Sperr: No, it’s not. It makes you wonder how they found us. Their agents sit behind these podiums, and they needed to be covered at the front and two sides of the podium. We ended up making something along the order of 140 of those things, plus covering their break-room tables, so that was one of the biggest sales we’ve ever had.

Sperr: Well, I think we’ve done a pretty good job of staying on top of the internet in terms of it being an easy find.

Ryssdal: Yeah, that’s smart. As you got going, did you have a decent supply chain? Were you able to get the stuff you needed to make what your customers wanted?

Sperr: There was a shortage, and it reared its head by the end of April. You would just be hearing from your distributors, that there’s a wait on that. And of course, the first thing to get knocked out is the oversize sheets, 6-foot-by-8-foot sheets.

Ryssdal: Yeah, of course. And how long did it last, where, where people were in this panic mode? I mean, you walk into any place now and they’ve all got those sneeze guards, right? So has demand fallen off?

Sperr: Well, it was sky-high through perhaps September, and then it did slow down all the way through February. We’re starting to see that demand go up again, like dramatically, just in the last two weeks as now California is gearing up for full reopening. Honestly, if you had this conversation with me three weeks ago, I would have said I don’t know if business is ever coming back.

Sperr: It is. You know, we didn’t bother with a [Paycheck Protection Program] loan the first time because we were so busy. And I guess we figured, well that, that’s for bowling alleys and restaurants and places that are really taking a hit, but we had to go for it the second time immediately. There was a big slowdown like we hadn’t seen for so many consecutive months.