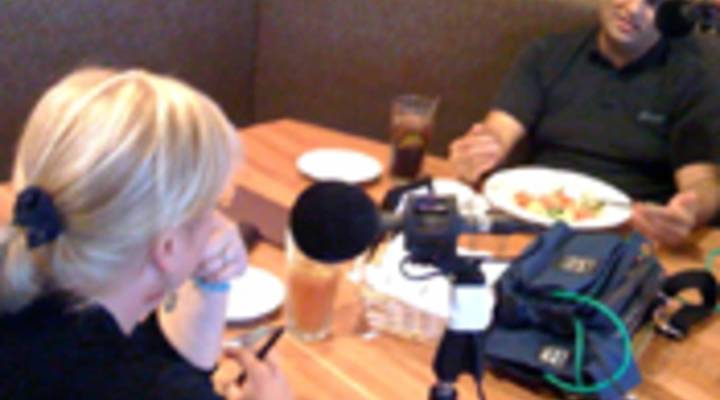 COPY
Mohnish Pabrai was one of the highest bidders in an auction to have lunch with Warren Buffett. Tess Vigeland

Mohnish Pabrai was one of the highest bidders in an auction to have lunch with Warren Buffett. Tess Vigeland
Listen Now

TESS VIGELAND: What would you pay for a private audience with an oracle? Say we toss in a swanky Manhattan lunch and you can bring along a few friends. For a minimum of $25,000, you could have lunch with Warren Buffett.

For the past 10 years the Oracle of Omaha has auctioned himself off to the highest bidder. With all proceeds going to a San Francisco charity called the Glide Foundation.
This year’s auction takes place this week on eBay.

I simply don’t have the cash. Last year’s winner paid more than $2 million. But we settled on the next best thing.

My lunch took place earlier this week in Irvine, Calif. at Zov’s Cafe and Bar.
It’s a local joint near Mohnish Pabrai’s house. Two years ago he was the highest bidder for the Buffett lunch.

Vigeland: Shall we have a seat and have lunch?

Vigeland: Remind us what you paid to sit and have lunch with Warren Buffett.

Vigeland: That’s a lot of money for lunch.

Pabrai: Well, I think that’s one way to look at it. But we were very willing to make the bid for the Glide Foundation, even if there was no lunch associated with it. I thought of the lunch as actually a bonus. My drive was really to thank Warren for all the enormous impacts he had in our lives.

Vigeland: What kind of impact did he have on your life?

Pabrai: I’m a money manager and I learned my craft from following Warren’s intellectual property, if you will. And you know, the way I looked at it is that if you lived in the time of Galileo or Newton or Einstein and you got a chance to spend two or three hours with them, what price tag would you put on that?

Vigeland: Well you talk about how he’s had an affect on your life beyond money issues. What do you mean?

Pabrai: If you look at Warren’s approach to living, approach to family, his approach to the way he approaches friendships, I think the simplicity and the focus on a great life has been a huge impact.

Vigeland: So how have you put that into effect in your life and your business?

Pabrai: First of all, in my business, I run a value fund and it’s very similar to what Warren Buffett ran in the 50s and 60s. So that has very direct impacts. But also in terms of the way we live our lives, I think we’ve learned to keep it simple, we’ve learned to look at what Warren would call an “inner scorecard.”

Waiter: Do you need more time to decide or are you all set to order?

Vigeland: Do you know what you want?

Pabrai: I’m here all the time, so I know. In fact, he knows what I want.

Waiter: And for you? Chicken kabob, spicy?

Waiter: All tomato and cucumber?

Pabrai: The thing about Buffett is, he’s extremely well-documented. There’ve been more books written on him than, I think, any of the other guys. In many ways, it’s like, I would say, being part of a religion. If you were a Christian and you were contemplating some action, you could always ask yourself the question, “What would Christ think of this?”

Vigeland: So that’s Warren Buffett for you?

Pabrai: In fact, my wife jokes with me, you know sometimes if she sees behavior that she doesn’t appreciate, she says, “Now Warren wouldn’t be doing that.”

Vigeland: “What Would Warren Do?”

Pabrai: Or she would just say he wouldn’t do that. But the thing is that I think it’s very important in life to have heroes. It just so happens that my hero is alive, when I’m alive. And my hero is actually willing to accept a bribe to sit down for a meal. So we paid the bribe and we got the meal.

Vigeland: Let’s talk a little bit about the lunch. Who went with you, where was it?

Pabrai: It was at Smith & Wollensky’s Steakhouse in New York. And I went with my wife and two daughters — Monsoon and Momachi, they were 10 and 12 years old at the time — and then my friend Guy Spier, who co-bid with me, came with his wife, Lori Spier. So there were six of us and then Warren. And the lunch went for over three hours

Pabrai: So it’s not like you’re in and out quickly. And I think in about five minutes, Warren makes you very comfortable, so you don’t feel intimidated.

Vigeland: And how does he do that?

Pabrai: Before he came to the lunch, he actually knew quite a bit about each of us. He came with gifts for both my daughters and in fact, I think they were bags of candy. They had just invested in Mars, so he brought M&M’s with his picture on them. So he won them over right away. And then he told them — they were sitting on either side of him — and he told them — they had both ordered hamburgers — and he said if there’s anything you guys leave on your plate, I will finish it off. And he said, “I only eat what I used to eat at the age of five.” In fact, the three kids are the table, you know, Warren and my daughters.

Vigeland: What about some of the questions that you asked Warren while you had him captive at the restaurant? What did you want to know?

Pabrai: Well, after the lunch, what I did is exit interviewed everyone who was there, you know, my daughters, and I basically made notes. And we finally came out with, I think there were 54 different threads to the covnersation. So it covered quite a bit of…

Pabrai: Yes, in just three hours, because we were just going non-stop, right? There was a wide-range of things covered. For example, Warren told my daughters that the single most important decision they would make in their lives was who they decided to marry. And I think that’s something that sticks with them. They actually think about that. Harina and I talked to him quite a bit very specifically about inheritance and philanthropy.

Vigeland: And what was his answer there? Because he is famous for basically saying his children are not going to get everything and that’s why so much of his money has gone to the Gates Foundation.

Pabrai: That’s right. In fact, a decent amount is going to the children’s foundations, but not to the children themselves. Buffett says leave enough money for your kids, for them to do anything they want, but not enough for them to do nothing. And I think that’s a very good philosphy, because yuo don’t want to distort or affect what they would’ve normally accomplished. So of course, the question is: what is that number, right? And what is that amount? And that amount probably varies.

Waiter: There you are. Everything look alright?

Pabrai: So my wife’s perspective on inheritance is that we should give money away, but we should try to give the kids a substantial amount as well. My perspective has been that, well, maybe not so substantial. But it was good to hear Warren’s perspective. I don’t think we fully bridged our gaps, but they’re not too far apart.

Pabrai: Yes, we bid in ’07. It just so happened with the calendar and everything else that we met in ’08.

Vigeland: So how much did you talk about money?

Vigeland: I know he says that one of the rules is he’s not going to talk specific stocks.

Pabrai: I think it’s a waste of time to talk to Warren about stock tips. I think there’s so much more wisdom outside of that. One step further, he said, “Monish, if you are just a slightly above investor, but have extreme patience, you cannot help but get rich over time.”

Vigeland: When you went to the lunch, did you go with a written list of questions that you wanted to ask?

Pabrai: I did make a list, just to organize my thoughts, but I didn’t take it with me to the lunch. My younger daughter actually threw Warren off-guard, because she suddenly brought up, she said, “Yes, was it hard when your wife left you?” So his first wife, Susan Buffett, in the 70s left Omaha and moved to San Francisco. I think the question caught Warren off-guard, I could see his eyes well up. But I think it took him just a few moments, then he was in control. Then I think he spent the next 40 minutes on Susan.

Vigeland: You mentioned earlier he was well-documented, lots of books about him, a million magazine articles. Was there anything through the lunch that you learned about him that you didn’t already know, that surprised you?

Pabrai: I felt like I was sitting with my grandfather. It’s very old school. I think it’s almost like you’re back in the 50s. So it’s almost like a time warp. That to me was very surprising.

Vigeland: And what kind of temper is he?

Pabrai: When we ended the lunch, I wanted to tip the waiters and I reached for my wallet, but I was too slow. So Warren had his wallet out and he left $200 on the table. So even though he’s very careful about how he spends money, I think he wants to make sure people who are doing their thing are well taken care of. And in fact, my daughters were commenting about his wallet, there was a big stack of hundreds. It was pretty funny.

Vigeland: They’d like your wallet to be full of those, right?

Pabrai: Yeah, exactly. I don’t have as many hundreds, no.

Vigeland: Well Mohnish it’s been a pleasure having lunch with you and talking about your lunch with Warren Buffett. Thanks so much.