Where recession can hurt clean energy

Where recession can hurt clean energy

Bill Radke: President Obama said yesterday nearly half a billion dollars of the federal stimulus money will go to geothermal and solar energy development. But with the recession weakening demand for energy of all kinds, the future’s not looking so green. From the Marketplace Sustainability Desk, Sam Eaton reports.

Sam Eaton: Global electricity use is expected to fall this year for the first time since World War II, according to a report out this week from the International Energy Agency. And that’s a good thing: as people use less energy, less CO2 reaches the atmosphere.

But there’s a potential downside. The recession may pave the way for a dirtier future.

Dan Kammen: During a down economic time, known investments whether those are natural gas or coal, look much more attractive.

Even President Obama’s stimulus package may not be enough to give clean energy a boost. Absent a mandatory cap on carbon emissions of the kind now under debate in Congress, there’s less incentive for investors to back renewables. That may help explain why the U.S. government now predicts global emissions will jump nearly 40 percent over the next two decades. 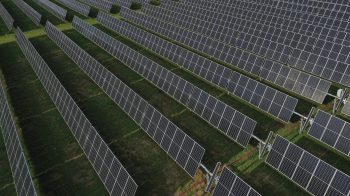