Steve Chiotakis: With questions about the future of the American auto industry, Detroit just can’t seem to win. And poor Detroit Lions, they can’t win — even in the off-season. Ever since last weekend’s NFL draft, critics have kicked them around for signing a first overall pick for almost $42 million bucks. That’s nearly a third more than last year’s first big pick. And the league is facing a rising backlash over rookie price inflation. The scorecard from Joel Rose.

Joel Rose: Detroit went 0-16 last year, which is why the team was able to pick Matthew Stafford. Earlier this week, the Lions’ new quarterback read the “Top Ten” list on the Late Show with David Letterman.

Matthew Stafford: Number 8: If the Lions win one game this year, I’m a hero.

Regardless, he’ll definitely be rich. Stafford is slated to earn more than anybody in the league. The NFL commissioner has said it’s quote “ridiculous” to reward untested rookies with enormous contracts. Yet teams keep doing it, year after year.

Brian Goff: That seems to be the trade-off that the NFL has lived with.

Brian Goff teaches economics at Western Kentucky University. He says the NFL pays more for its rookies compared to other sports leagues, but the players have less mobility down the line.

Goff: If he does pan out, well you’ve got him pretty much as long as you want him.

NFL owners are likely to push for a rookie salary cap next year, but the players’ union and high-powered agents are expected to push back just as hard. 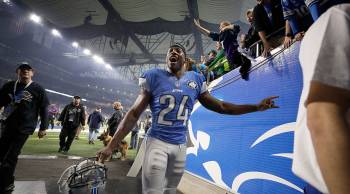 How the Detroit Lions helped the NFL own Thanksgiving